Political observers, experts and senior analysts were predicting that the election 2013 in Pakistan will write new history 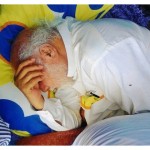 in the country. The 11th May 2013 election will bring a new change in the corrupt political system of Pakistan. Those who were praying for the betterment of Pakistan were expecting that the political system which has been dominated by feudal cum politicians, religious leaders, landlords, and corrupt bureaucracy would be knocked down by Imran Khan. The people are talking that as more than 35 percent of voters in this election were youth and they would bring victory to Tehreek-e-Insaf (Justice Movement) of Imran Khan who would clean Pakistan from corrupt and disabled system of Pakistan. On social media the youth majority of them were first time voters and were excited proclaiming the tsunami of political change which would wipe-out traditional politicians and their parties. Seven million overseas Pakistanis living in various countries including Australia were waiting for the moment of 11th of May when Pakistan will shine again under the leadership of Imran Khan – a cricket veteran and rising political star.

The Pakistani nation was in deep trauma due to on-going terrorists’ attacks, target killings, corruption and sky-rocketing prices of the goods of daily use in the last 5 years and then deadly threats of Taliban to create further terrorism in the country if democracy prevails.

Therefore, this election was the most crucial political exercise for the Pakistani nation to rescue the country from the dirty, corrupt and unstable system. Unfortunately, the results of the election watered down on all of those who were hoping for change. The election results are validating that nothing has been changed in the Pakistani so-called democratic system. Except about 30+ seats win by Pakistan Tehreek-e-Insaf (PTI) of Imran Khan and few more by new independent faces in the house of 272, all the seats were won by the same corrupt political gurus.

Pakistan Muslim league (PML (N)) of  two time Prime Minister, Mr. Nawaz Sharif whose government was sacked first time and thrown-out by General Pervez Musharraf second time, won 125 seats out of 272 mainly from Punjab and secure for the power in the capital Islamabad. The previous ruling party, Pakistan Peoples Party (PPP) received shameful defeat and could only win 32 seats mainly from Sind Rural. The Mutehida Qaumi Movement (MQM) of Altaf Hussain maintained its old constituencies of Karachi, Hyderabad and Sukkur which is Sind Urban dominated by Urdu-speaking (referred as Muhajirs). In the province of Khaiber Pukhtoon Khwa (KPK) of Pushtoons (Pathans) PTI won majority seats of national and provincial Assemblies. And in the province of Baluchistan, as the results are coming in none of the other parties are yet to succeed to win the majority seats to form the government.

These results are showing that the people of Pakistan are divided into provinces and ethnicities. The nationalism and national vision is dead. Majority of people are thinking and choosing their leaders and parties on the basis of Punjabi, Pathan, Baluchi, Sindhi and Muhajir.

Pakistan has all those required resources, technology and manpower which a country needs to stand up on its own feet. The only thing lacking in Pakistan is the clean and fair governing system which is due to the corrupts and undeserved politicians time and again succeed to come in power, sitting in parliament and making reforms in the country which are just suited to them and not to the common people of Pakistan. At present, almost every institution of Pakistan has been destroyed in the last 5 years of the previous government. The country’s economy, security and stability have been in a terrible situation. Therefore, the fate of Pakistan and future democratic system of Pakistan is in the hands of the Pakistan Muslim League (N) and its leadership Mr. Nawaz Sharif.

Now the biggest question mark is; will Nawaz Sharif be able to form a functional government who can govern peacefully and smoothly and deliver the goods. In the past, Nawaz Sharif first came in power November 1990 as being the Prime Minister of Pakistan. His term was interrupted in April 1993 when then President Ghulam Ishaq Khan dissolved his government accusing him of corruption. Six weeks later, in May 1993, Supreme Court overruling President’s power restored his parliamentary government. However, Nawaz Sharif was accused again of defaulting on state bank loans to his family businesses and laundering at least $66 million of the borrowings. The Sharif family’s wealth is built around steel, paper, sugar and textile mills and his business empire rose astronomically during 1980s and 1990s when he was in power. Nawaz Sharif and his family had not missed any chance to pile-up money in foreign banks. The income tax laws were amended to defray unlawful rebates, and grow their family business by all means. The freedom of press was humiliated. New banking schemes were launched to oblige family and friends. The stories of his exotic life and about his lavish palace in Rabwa published like a romantic serial in media.

So, either the people of Pakistan have short memories or are they are very generous to forgive the political leaders when choosing them when casting votes. Any, will Mr. Nawaz Sharif be able to form a strong government in the centre and work with the provincial governments in Sindh and KPK which will be most likely of PPP-MQM coalition in Sindh and of PTI in KPK, we have to wait and see.