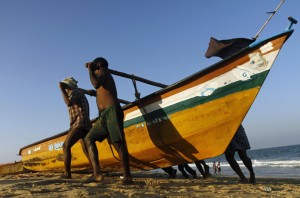 Sri Lanka has decided to free Indian fishermen detained for poaching to thank India for abstaining from a vote by the United Nation’s top human rights body to launch an investigation into alleged abuses during Sri Lanka’s civil war.

President Mahinda Rajapaksa ordered the release of all Indian fishermen “as a gesture of good will in response to India’s stance” at the UN Human Rights Council meeting in Geneva, said presidential spokesman Mohan Samaranayake on Friday.

Poaching has become a contentious issue between the two nations. In January, fisheries ministers from both sides met in New Delhi to discuss releasing detained fishermen and taking long-term measures to prevent unlawful fishing in each other’s waters.

Following the meeting, hundreds of fishermen from both countries were released, but poaching continues and authorities from both sides still detain the errant fishermen.

India abstained from voting on Thursday when the rights council approved a US-led resolution to launch an investigation into the civil war over the strong protests of Sri Lanka’s government.

Members of the 47-nation council voted 23 to 12 in favour of the resolution, with 12 abstentions, following a heated two-day debate.