Troops deployed in Bangkok as military insists its assumption of responsibility for national security “is not a coup”. 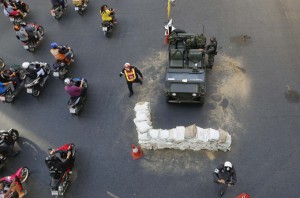 Thailand’s army has declared martial law across the country to restore order following months of anti-government protests that have left 28 people dead and hundreds wounded.

An announcement on military-run television said martial law had been invoked “to restore peace and order for people from all sides”, stressing that the move “is not a coup”.

“The public do not need to panic but can still live their lives as normal,” it added.

The move, which gives the military control of nationwide security rather than the police, risks angering supporters of the government if it is seen as tantamount to a coup.

Chaikasem Nitisiri, the justice minister, told the Associated Press news agency the army had not consulted the cabinet.

He played down the move, saying the caretaker government was still running the country but that the army was now in charge of security.

“Security matters will be handled solely by the military, and whether the situation intensifies or is resolved is up to them,” he said.

“There is no cause to panic. Personally, I welcome the move.”

He said soldiers had been deployed to areas where there were anti- or pro-government protesters and that the army had been given the authority to break up gatherings of more than five people, although it did not say it would do so.

Soldiers were seen in the heart of the city’s retail and hotel district and also entered private television stations to broadcast their message.

They also surrounded the national police headquarters in the city centre, reported the Associated Press.

But the vast skyscraper-strewn city of 10 million people remained calm, with schools open and commuters driving and walking to work, AP added.

Sam Zarifi, Asian regional director at the International Commission of Jurists, said this year marked the 100th anniversary of martial law in Thailand and that it had a “very bad history”.

“It is a very confusing declaration of martial law. Today it seems like it’s coming in with very light footprint, but it is not really clear what it hopes to accomplish,” he told Al Jazeera from Bangkok.

“There was already an emergency decree in place in Bangkok that provided security forces with significant authority to do what they wanted. What martial law does is that it effectively puts the military at the top of the authority.

“So the question for all of us in Bangkok right now is: ‘Is the country’s acting prime minister still in charge?’ Does that constitute a coup? The military says ‘no’, but if it doesn’t it is hard to understand why they would declare martial law not just in Bangkok but throughout the country.”

The dismissal of Prime Minister Yingluck Shinawatra earlier this month in a controversial court ruling has raised tensions in the country, which has endured years of political turmoil.

Yingluck’s “Red Shirt” supporters have warned of the threat of civil war if power is handed to an unelected leader, as demanded by the opposition.

They are calling on the upper house of parliament, the Senate, to invoke a vaguely worded clause in the constitution to remove caretaker Prime Minister Niwattumrong Boonsongpaisan – an ally of Yingluck – and appoint a new leader.

Anti-government demonstrators, who had vowed a “final battle” in coming days to topple the prime minister said they had called off a march that had been planned for Tuesday.

The country’s embattled government was not consulted in advance about the imposition of martial law, said Paradorn Pattanatabut, chief security adviser Niwattumrong.

“The caretaker government still exists with Niwattumrong as caretaker prime minister. Everything is normal except the military is responsible for all national security issues,” he said.

Thailand’s army chief also ordered the censorship of the media in the interests of “national security” in a signed statement delivered on every television station.

The army “prohibits all media outlets from reporting or distribution of any news or still photographs detrimental to national security,” said the statement by General Prayut Chan-O-Cha.