Case against Yingluck Shinawatra relates to her replacement of country’s security chief with a relative in 2011.

Prime Minister Yingluck Shinawatra has arrived at Thailand’s Constitutional Court to face charges of abuse of power, the first of two legal challenges that could see her removed from office this month. 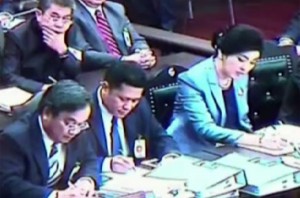 Tuesday’s hearing follows six months of protests against Shinawatra, who has held on to power as the number of demonstrators has gradually dwindled.

The charges relate to Shinawatra’s replacement of her security chief with a relative in 2011.

The prime minister told the court her actions had been for the good of the country, and that the relative was no longer married in to the family at the time of his appointment.

Supporters of the government say that the case is another attempt to unseat Shinawatra by a court that they believe is biased towards her.

There are fears that her possible removal may lead to confrontation between her supporters and opposition groups, the Reuters news agency reported.

Both supporters of Thailand’s leader and anti-government protesters are planning to hold large rallies in or around the capital next week.

If Shinawatra is forced to step down, legal experts say her entire government would have to go too.

The verdict will not be handed out on Tuesday but is expected to come this week.

If judges do rule against the prime minister and she is removed from office, analysts say there could be a legal vacuum.

Elections in February for the lower house of parliament, from which an acting prime minister would have to be chosen, were nullified.

Shinawatra also faces charges of dereliction of duty over a state rice-buying scheme that critics say is riddled with corruption and has made huge losses.

The charges were brought by the National Anti-Corruption Commission, which is expected to deliver its ruling this month.
If she is found guilty on this count, Shinawatra faces a five-year ban from politics.

Shinawatra’s Puea Thai Party and leaders of the anti-government movement have rejected proposals by opposition leader, Abhisit Vejjajiva, to delay a general election planned for July for six months.

The plan aimed to give enough time for political and electoral reforms to be implemented.

Shinawatra’s cabinet is expected to discuss the election date on Tuesday and could draw up a draft decree for royal endorsement.

Thaksin’s government was overthrown by the military in 2006 and he now lives in exile to avoid a jail term handed down in 2008 for abuse of power.

His opponents accuse him of corruption and nepotism, charges he denies.