According to various sources, among the 1.5 billion Muslims in the world over 60% live in South East Asia. Indonesia, Malaysia, Bangladesh, Pakistan are Muslim dominated countries in Asia which make most of the Muslim populations of the World. The Middle East Region, especially Saudi Arabia, United Arab Emirates (UAE), Qatar, Bahrain, Muscat utilising their oil-based wealth have distinctly developed state of the art Islamic infrastructure. On the other hand, the Islamic development and the progression of Muslims in different professional fields in Malaysia, Indonesia, Pakistan and Bangladesh, in recent times, continues to bring promising new innovative outlook within the Muslim World. In the South East Asian Region, the countries like Philippine, Vietnam, Laos, Myanmar, and Thailand are relatively underprivileged nations where Muslims are in minority yet their progression as an Islamic Community are surprising and worth applauding.

Recently, I visited Thailand twice on the invitation of the organisers of the two highly impressive Islamic events of 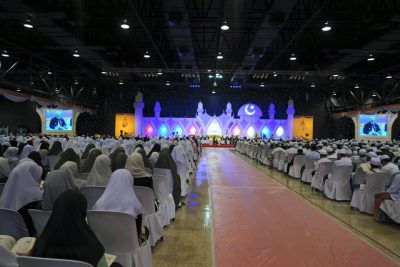 the international status; first to attend the Thailand Halal Assembly 2015 held in December 2015 and then Annual Mowleed (Commemoration of The Prophet Muhammad (PBUH)) held in April 2016, in Bangkok. During my visits, I met with the prominent Thai Muslims of various walk of life – youth, social workers, entrepreneurs, educationists, Islamic leaders, Islamic scholars and intellectuals. Then I witnessed their amazing work in different professions including scientific research particularly in halal science during my visit to their beautifully decorated exhibits. For me, it was inspiring, impressive and a pride being a Muslim. Their progression Islamically as well as educationally, socially, and economically is a lesson for the rest of the Muslims that no one can stop Muslims as majority or minority in any part of the world if they rightfully understand Islam and its codes of life. I would boldly say that Thai Muslims are not only the role model for many Islamic States who have 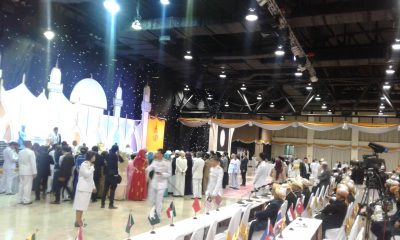 far better opportunities and advantages than Thai Muslims but their fellow Thai people are an example of how one can still achieve excellence with dedication and hard work.

It is to be noted that there is no official religion in Thailand but the majority of the Thai people are Buddhist. Muslims are only about 6% of the entire Thai population, mainly comprised of Thai Malays in the Southern and in the areas close to borders, however, today, Thai Muslims can be seen in almost every big city and in significant numbers in Bangkok. According to various reports, Muslims in Thailand are fastest growing community and prominently seem as the most organised, disciplined and cultured community. There was a time when people could not see or identify Thai female Muslims in 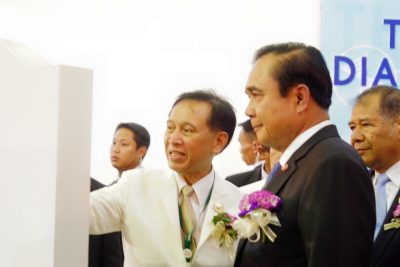 public places but now one can see them covering their heads working in public jobs, commercial centres, banks and almost in every professions and businesses. Similarly, Muslim youth, young boys with typical Islamic cap and girls with head scarves can be seen in colleges, universities and other educational & technical institutes. Within the Muslim community the Islamic affairs in Thailand are dealt by the Central Islamic Council of Thailand. This Council is run through Councillors who are appointed by the King. The Council behaves as a coordinating body between the government departments and Islamic organisations. The main affairs like Islamic education, building mosques, Haj affairs (pilgrimage to Saudi Arabia) are dealt by this Council. Then there are 38 provincial Islamic committees in Thailand which deal the provincial and local Islamic affairs. The local bodies also 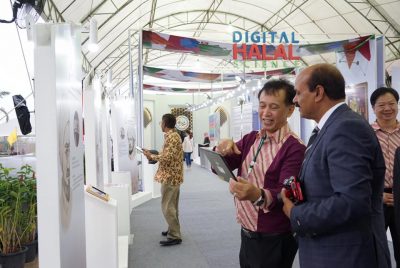 run Islamic schools and coordinate in maintaining Islamic curriculum in education. In Bangkok alone there are about 15 beautiful and big mosques which can be seen full of people during prayers. There are many Islamic Schools that are now successfully running in Bangkok where hundreds of students, male & female, are studying. Major Universities included Islamic Studies as part of the subjects.

Thailand which is the most attractive tourist destination in the world and has been famous for its free and fun-loving culture for the Western tourists, today is a very economical and attractive destination for Muslim tourists as well. Halal Restaurants, Halal Hotels, Mosques and Islamic School can be found in almost every tourists’ destinations.

Halal Tourism is now one of the thriving sector in the Thai tourism industry. Now, ‘Halal’ signs can b 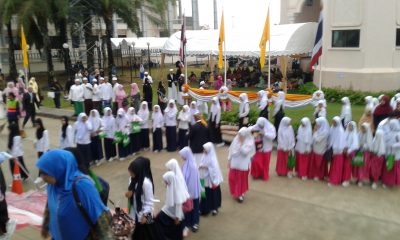 e seen all over major cities – in restaurants, hotels and resorts. Thai commerce sector is promoting now Islamic banking, Islamic micro-finance, ‘Halal’ housing and Islamic condominium projects and so on. The Muslim business professional and entrepreneurs are now introducing new products & services based on ‘Tawhid’ as business model.

Behind the major Islamic development and progression in Thai Islamic Community, there is a one prominent name, Professor Winai Dahlan. He is the founding Director of Halal Science Centre at Chulalongkorn University. His services for the Thai Muslims are countless and priceless. He has played a vital role for Thai Muslims, to promote the understanding of the meaning of life in Islam and the halal life-style. He has developed and introduced a unique Halal logistical tracking system and protocols called Hal Q. Today, not only in Thailand but 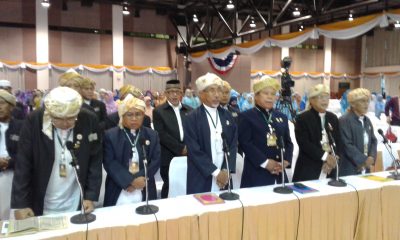 many organisations in Muslim countries are adopting his Hal Q and are treating it as Halal industry standard. Today, Thailand is acknowledged as one of the top halal food & products manufacturers and suppliers in the world.

I stayed in a 5-star hotel during my visit in Bangkok which has fully Islamic environment with no-alcohol served, prayer facility, rooms equipped with Muslim needs and fully halal cuisines. I found many non-Muslims staying in this hotel and when I asked them their reason to stay in that hotel, their common response was this hotel is very safe and sound for their families. 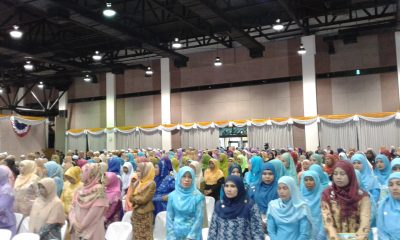 During my presence in the Halal Assembly 2015, I was very impressed to see that more than 50 percent staff and volunteers were females who were working with great competence and dedication. They were running the stage, dealing at reception, working in crowd control, and running exhibits. Young and old taking great interest in the different sessions of halal conference and workshops. In all 3-day event, people were continuously coming from different parts of the Thailand in groups. Within the Thai Muslim attendees, it was showcase of multicultural festivities of very Islamic in nature. Islam is the most modern religion of the world that provides equality, fairness and social freedom to all genders. This can be seen among Thai Muslims. Men and women work side by side in every profession without any fear but within Islamic codes of social conduct. Men and women behave so ethically with high level of mannerism and discipline, possessing a well-maintained social culture that is not that common now within some parts of the western society and some areas within the Muslim world but it is still maintained by majority of Thai Muslims which serves as a great example.

I attended ‘Al-Maolid Al-Nabawi, A.H 1437, Celebration of Thailand’ held from 30 April to 2 May 2016 at the National Administration Center of Islamic Affairs Chalermprakiat
Nongchok District, Bangkok.

First of all, the venue (National Administration Center of Islamic Affairs) that contains a beautiful mosque, a grand 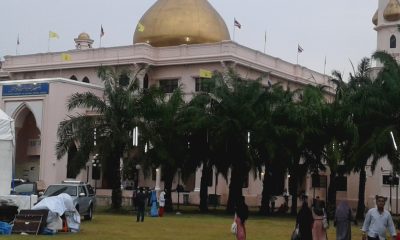 exhibition hall and huge park. I have attended many events of Mouleed (Nasheed) or Seerat-un-Nabi / Milad-un-Nabi (commemoration of Prophet Muhammad, PBUH), even I have organised every year in Sydney, but this was a special and unique event for me where I saw variety of activities associated with the commemoration of the holy prophet, Islam, Islamic way of life, and Muslims. This was a 3-day convention & festival style event where many activities were happening in different sections. There were stalls of Islamic merchandise, food & products, exhibition of the portraits of renowned Islamic scholars and scientists, exhibition of creations & innovation of Thai Muslim University graduates. Then there was continuous recitation of Holy Quran, memorization/recitation of Holy Quran competitions, Youth Islamic skill tests, speeches on the life of the Prophet Muhammad PBUH and workshop/seminar on critical issues of Islamic 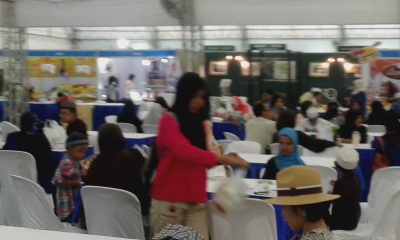 community for example of the topics was ‘Resolution on Religious Conflict in Muslim Community’. It was highly commendable for the organisers especially for Chairman of the organising committee, Prof Winai Dahlan, that the event was opened by the Crown Prince Maha Vijiralongkorn and closed by the Prime Minister General Prayut Chan-o-Cha and where top Thai Islamic leaders, Imam and Sheikh ul Islam were the very important dignitaries. The entire 3-day event was a great showcase of Islamic unity, harmony, discipline and understanding of the Thai Muslims.

The way the Thai Muslims, being only a 6 percent of the entire Thai population are contributing their priceless share to the Thai society and at the same time building their good image and example in Thailand, is a great lesson for those Islamic countries and their people that if an individual, group or a nation want to implement Islam in their lives and system then no one can stop them. It only needs sincerity and honesty with their faith (Islam). The writer is Sydney-based Journalist/media analyst, editor-in-chief Tribune International (Australia) and founding director of Halal Expo Australia.