Thailand’s king has endorsed coup leader General Prayuth Chan-ocha as prime minister, four days after he was elected by his own hand-picked parliament, paving the way for the formation of an interim government.

Approval from King Bhumibol Adulyadej on Monday is a formality, and the formation of an interim government will follow in the coming weeks, although power will remain firmly in the military government’s hands. 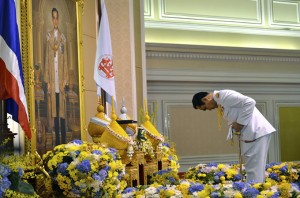 “His Majesty the King has endorsed General Prayuth Chan-ocha as prime minister to govern the country from this day onwards,” the Royal Gazette said in a statement published on its official website on Monday.

Reporter, reporting from Bangkok, said the ceremony held at the military headquarters lasted for half an hour, during which Prayuth delivered a speech and listed a “laundry list of reforms” for the government.

“His majesty the king has appointed me Prime Minister. I am extremely grateful… this is a great honour for me and my family,” Prayut said after the ceremony.

“I will work with honesty and for the benefit of people and the nation.”

Heidler said that the general also acknowledged a “long and very difficult road ahead for reforms,” as he tries to form a new cabinet, which is expected in October.

Our correspondent said Prayuth’s government is expected to be full of military officers.

Prayuth was appointed prime minister on Thursday by 191 out of 197 members of the military-dominated national assembly. He was the sole candidate for the post.

Prayuth led a May 22 coup, which the military said was necessary to avoid further bloodshed, after months of turbulence pitting protesters, including the urban elite and southern Thais, against supporters of ousted Prime Minister Yingluck Shinawatra.

Prayuth, who is due to retire as army chief in September, moved quickly to silence dissent and deployed troops to quell protests in the weeks after the coup.

The military government, formally known as the National Council for Peace and Order, has tried to project a positive story and has pointed to modest improvements in the economy and consumer confidence since the takeover.

Southeast Asia’s second-largest economy avoided recession in the second quarter of the year, but the tentative recovery is some way from matching the government announcements on progress.

Thaksin, who says he wants to free Thailand from a vicious cycle of political instability, has lived in self-exile since 2008 to avoid serving a jail sentence for corruption charges he denies.

Critics say his rhetoric, including nostalgia-tinged references to an agrarian utopia and a “return to morality in Thailand,” is outmoded and threatens to drag the country back by decades.