Tribune International Report by Sarwat Hassan, Dec 1, 2022; Modern global society needs to eradicate misunderstandings, misconceptions, and confusion about the Halal Lifestyle by creating awareness and educating Muslims and non-Muslims through Islamic leaders, scholars, academics, researchers, technologists, writers, and journalists, all of whom ought to play a major role in eradicating misunderstandings, misconceptions, and confusion.

In this regard, the Thailand Halal Assembly (THA) is one of the most prestigious and informative annual international conferences for

Muslims and non-Muslims. Since its inception in 2014, the Thailand Halal Assembly has gained remarkable popularity around the world, especially in the Muslim world. In collaboration with the Central Islamic Council of Thailand (CICOT), the Halal Standard Institute of Thailand (HSIT), and the Standards and Metrology Institute for Islamic Countries (SMIIC), the Halal Science Center Chulalongkorn University (HSC-CU) deserves the highest credit for organizing such an impressive mega event every year.

“Soft Powering of Halal Science, Technology, and Innovation” is the theme of this 2-Day convention. 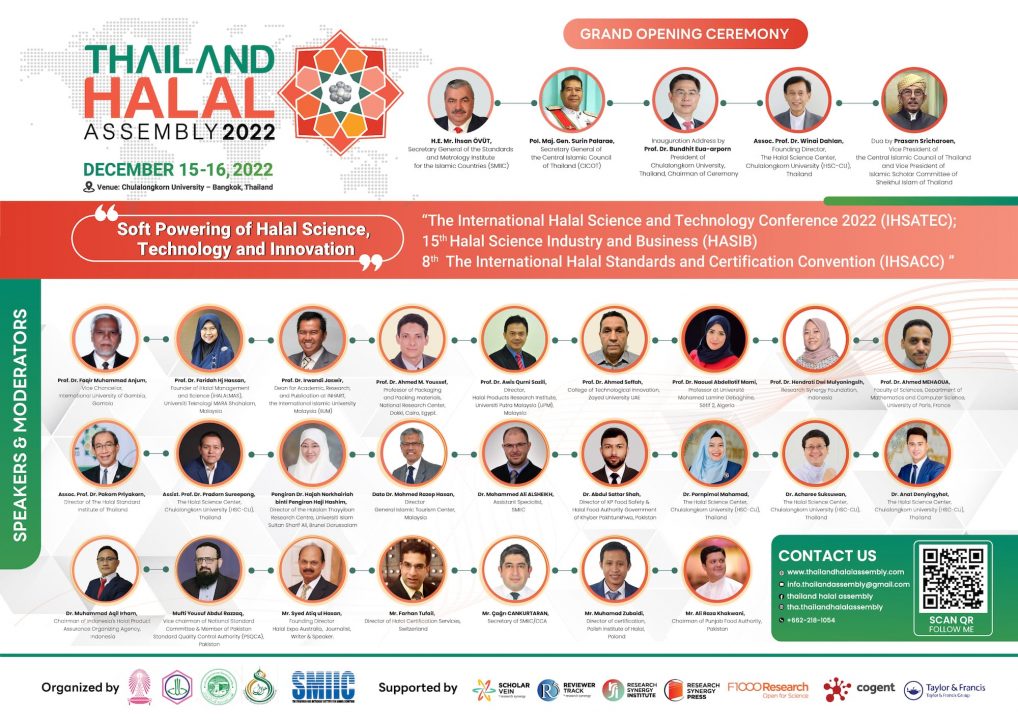 The Thailand Halal Assembly 2022 is one of the most prestigious events in the Muslim world.

Researchers and academics among Thai Muslims have contributed to the continued success of the Thai Halal Assembly (THA).

Dr. Pakorn Priyakorn is Director the of the Halal Standard Institute of Thailand (HSIT). It is an academic organization affiliated with the Central Islamic Council of Thailand (CICOT). Together with the Halal Science Centre at Chulalongkorn University, HSIT and CICOT have established Halal Standardization for the CICOT’s Certification Systems in Thailand.

Prof Dr. Winai Dahlan is the director of the Halal Science Centre (HSC-CU), the first Halal science in the world. It promotes halal manufacturing and service through exhibitions and scientific and technological cooperation with halal centers throughout the world.

Prof Dr. Winai Dahlan is involved in scientific training and has written more than 40 original research articles published internationally and locally. He has also produced more than 2000 scientific and nutritional articles, writing weekly in 3 magazines since 1989. He is the only Thai Muslim Scientist ranked in The World’s 500 Most Influential Muslim Scientists in Science and Technology.

Both are the assets of Thai Muslims who have spent most of their lives building HSIT, and HSC-CU, and organizing Thailand Halal Assembly since 2014. Tribune International acknowledges their dedication and hard work for Thai Muslims and the entire Ummah.

Tribune International sends its congratulations and best wishes to the Thailand Halal Assembly 2022.