A power terrorist attack on Sunday evening killed more than fifty seven and wounded more than hundred people in Lahore close to Wagah border with Indian when people were returning after attending the daily flag salutation ceremony.

Within few hours of the attack it was claimed by at least two different terrorist groups who called media from unknown phone numbers but officials believe that a ‘third party’ may be involved in the most serious terrorist attack in years.

Initially Police claimed it was a cylinder explosion but later high officials said that the blast is suspected to be a suicide attack. Among those killed were children and women while three Pakistan Rangers officials were also killed.

This is for the first time that a high density explosion took place in Lahore near Pakistan-India border which had been a scene of cross border firings from Indian forces since four weeks.

Security officials claimed that the suspected terrorist wanted to enter into the ceremony and attack the offices of Pakistani security forces at Wagah border check point.

The Jamaat-ul-Ahrar a ficticious group claimed responsibility for the Wagah border attack as its spokesman Ehsanullah Ehsan, speaking to Dawn on telephone from Afghanistan, said it was carried out by one of their men.
Ehsanullah said that a person named “Hameedullah” carried out the suicide attack.
Ehsanullah rejected the claim made by another group “Jundullah” and promised to release the video of the attack soon.
Earlier another terrorist group “Jundullah” linked with Islamic Movement of Uzbekistan” claimed the responsibility for the Wagah border attack. The spokesman of the splinter group of the TTP Ahmed Marwat told a local newspaper that the attack is a reaction to military operation Zarb-i-Azb and Waziristan operation.

Claims for specific incidents are often hard to verify as the terrorist use foreign satellite phones and Afghan-issued SIM cards. 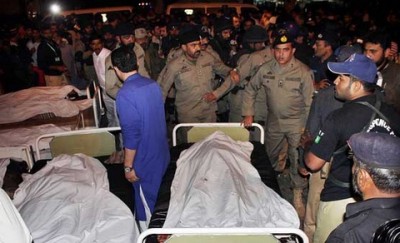 Speaking to Pakistani TV channels Inspector General Punjab Police Mushtaq Sukhera has confirmed that it was a suicide blast. He said that suicide bomber blew himself up near second barrier at Wagah border.

Cross border firing and rocket attack along Pakistan-India border during last six weeks resulted in over dozen deaths on Pakistan side but Indian officials claimed that Pakistan had ‘violated the border.’

Indian Defence Minister Arun Jaitley in mid-October warned Pakistan of “dire consequences” if it continued to indulge in ceasefire violations along the border in Jammu and Kashmir.

“I can tell you if Pakistan continues to indulge in adventurism, this adventurism will become unaffordable (for it),” he told reporters. Pakistan must understand that the response “Our forces” would give to Pakistani aggression would be effective. “Pakistan will have to pay a heavy price’ for what it was doing, the Indian Defence Minister was quoted as telling Indian media.