Missouri crowd threatens to “kill the police” after reportedly unarmed black teenager is fatally gunned down.

Tensions have flared in the US state of Missouri after a black teenager was fatally shot by police, sending a crowd of local residents into a frenzy. 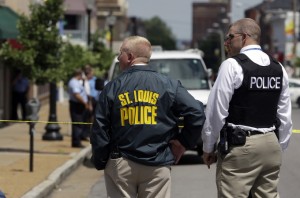 The shooting of Michael Brown, an 18-year-old high school graduate, sent hundreds of residents from the St Louis suburb of Ferguson into a heated confrontation with police lasting several hours on Saturday.

The crowd shouted obscenities and threats, including “kill the police,” but there were no reports of any injuries.

A spokesman with the St Louis County Police Department confirmed one of its officers had opened fire, but did not give a reason behind the shooting.

The police are to hold a news conference about the shooting at 10am (15:00 GMT) on Sunday.

The teenager’s grandmother, Desiree Harris, said she was expecting her grandson to visit her that afternoon and discovered him dead after she heard commotion outside the apartment complex in Ferguson.

At the height of the confrontation, police called for about 60 other police units to respond to the area, where around two-thirds of the residents are black.

By early Saturday night, dozens of police cars remained parked near the scene as mourners created a makeshift memorial in the middle of the street.

John Gaskin, a member of the St Louis County National Association for the Advancement of Colored People (NAACP) civil rights group, urged the FBI to get involved and “protect the integrity of the investigation”.

Tension has been brewing since asthmatic New Yorker Eric Garner died in custody after being placed in a banned chokehold.

“With the recent events of a young man killed by the police in New York City and with Trayvon Martin and with all the other African-American young men that have been killed by police officers… this is a dire concern to the NAACP, especially our local organisation,” Gaskin told the Associated Press new agency.

Gaskin said the crowd was reacting to a “trauma”.

“Anytime you have this type of event that’s taken place, emotions are going to run high,” he said.

Ferguson Police Chief Thomas Jackson told the Post-Dispatch that the officer involved has been placed on paid administrative leave.

“We are hoping for calm and for people to give us a chance to conduct a thorough investigation,” Jackson said.