Hyderabad to remain common capital for 10-year-period of Telangana and Andhra Pradesh, from which it was carved out.

India is celebrating the creation of its 29th state, Telangana, after Andhra Pradesh was split in two.

K Chandrasekhar Rao, from the Telangana Rashtra Samithi (TRS) party, took his oath as the first chief minister in a ceremony on Monday morning. 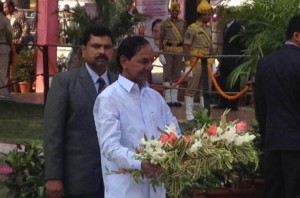 There had been fireworks and jubilation as the new state came into being at the stroke of midnight.

As he was sworn in, Narendra Modi, India’s prime minister, said on Twitter: “India gets a new state! We welcome Telangana as our 29th state ….Congrats to K Chandrasekhar Rao Garu on taking oath as Telangana’s 1st CM. My best wishes to people for the state’s development journey.”

M Kodandaram, who leads the Telangana Joint Action Committee (TJAC), said it was a historic moment for the people of Telangana and called it a collective effort.

“We are very happy. It has been a very long struggle and a collective effort. And after so many sacrifices finally we have achieved Telangana. This is a very important event in the history of Telangana.”

Demands that the southern region be made a separate state have existed for almost as long as independent India itself.

People gathered at Gun Park, a memorial for people who sacrificed their lives for formation of Telangana, and Hyderabad’s Osmania University to celebrate the moment.

The new state will have a population of about 35 million across 10 districts.

Kodandaram said: “The government must implement its manifesto. Basically, we the Telangana are looking for a rapid development of the region and equitable distribution of the benefits. In simple terms people are looking for inclusive growth and that is what we expect the government to fulfil.”

The Telangana Bill faced resistance from opposition parties and from the Congress party, which proposed it.

Syed Salim Pasha, a student from Osmania University in Hyderabad, said: “Almost 1200 people have given their lives for the state. This is a golden moment for us and the state of Telangana which is supposed to become the 29th state and involves sacrifices.”

The historic city of Hyderabad, where Google, Microsoft and Dell have major sites, will remain the common capital of the two states for a 10-year period.