A young Tamil asylum seeker is fighting for life in a Sydney hospital after setting himself on fire because his application for a protection visa was rejected by the Immigration Department.

The man finished a three-hour cleaning shift at Balmain’s shipping yards last night, then went outside, doused himself with petrol and tried to take his own life. 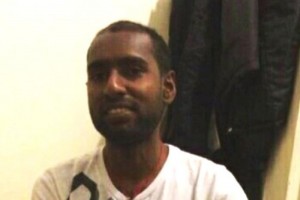 Tamil Refugee Council spokesman Trevor Grant says the man is in a critical condition in Sydney’s Concord Hospital, with burns to most of his body.

“There is some hope that he may survive,” he said.

“They’re trying desperately to get his 65-year-old mother to Australia to be at his bedside, along with his brother.

“But he’s already had a number of surgeries, skin grafts etc., and he’s apparently going to have more today.”

The Federal Government is in contact with the Sri Lankan High Commission over the incident, said a spokeswoman for Immigration Minister Scott Morrison, adding that service providers did not hold or report any concerns about the man’s mental health.

The spokeswoman said in a statement:

“The government’s focus is to ensure for the proper care and support of this young man, in partnership with the Sri Lankan High Commission.

“The Minister is advised the young man had arrived in Australia in June 2012 and was released into the community on a bridging visa in October.

“In July 2013 he was found not to be owed protection and this decision was affirmed on appeal by the Refugee Review Tribunal (RRT) earlier this month.

“The Minister is advised that following receiving the news of the RRT decision, service providers did not hold or report any concerns about his state of mental health.”

Mr Grant says the young man is one of many asylum seekers terrified of being sent home.

“This is really an inevitable outcome of a policy that is purposely designed to create suffering in order to deter people,” he said.

“They’re undergoing psychological torture not knowing what’s happening to them, living in fear every day of being returned to danger.”

No reason not to return home says Sri Lankan Diplomat

“It’s safe for anybody and everybody is looked after well,” he said.

“It is also sad what these so called refugee advocates and so called lawyers are saying…and I see that as a bit of a business.

“They have to look at the situation in Sri Lanka before going and commenting without any facts.”