Some 700 Taliban rebels battle Afghan forces near Kabul as military’s capacity to deal with security is tested. 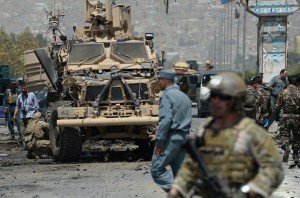 Rebels have this summer mounted increasingly intense assaults across several provinces, involving hundreds of fighters, as the country braces for the withdrawal of foreign combat troops after 13 years.

“There are some 700 of them and they are fighting Afghan forces for territorial control,” Niaz Mohammad Amiri, the provincial governor of Logar province, told the Reuters news agency on Tuesday.

The Taliban have dug in at Logar, about an hour’s drive south of the capital, and nearby Wardak province to the west, in recent years.

They have used the provinces – gateways to the capital – as launchpads for hit-and-run attacks and suicide bombings in Kabul.

The main roads into the capital are all tightly controlled, but the rebels have been able to breach the checkpoints and staged dozens of attacks, killing scores of civilians and soldiers in the city of about five million this year.

“We are being extra careful not to cause any civilian casualties. We have enough forces to deal with it,” Esaaqzai said.

Zabihullah Mujahid, a Taliban spokesman, said the rebels were battling Afghan forces from all sides to overrun the district.

“The area is under siege and we have already taken over many security outposts and killed many Afghan forces,” he said.

“The fighting has since stopped,” he said.”Five army men and three police are wounded. Many Taliban have been killed. We don’t know exactly how many. Their bodies are still lying on the ground outside.”

Foreign troops are due to pull out of Afghanistan later this year. Afghanistan’s security arrangements beyond 2014 are unclear, as Kabul and Washington have yet to sign a bilateral security agreement designed to keep a small force of American soldiers in Afghanistan next year and into 2016.

The Afghan president, Hamid Karzai, has refused to sign the agreement, although the two men vying to replace him have vowed to implement it immediately upon taking office.

Four months after going to the polls, a winner in the presidential poll is still not clear. On Tuesday, Karzai appealed for the two candidates to end their dispute over election results and save the country from further violence and economic decline.