KABUL: The Taliban launched a brazen assault in the Afghan capital on Tuesday, with a suicide bomber detonating his vehicle outside an election office on the edge of Kabul while two other gunmen stormed into the building, trapping dozens of employees inside and killing four people. 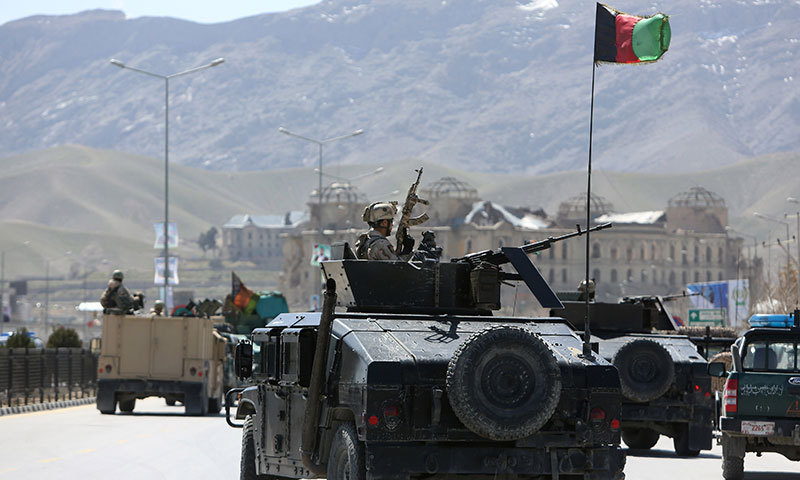 A candidate for a seat on a provincial council was among those killed, along with an election worker, a civilian and a policeman, Kabul Police Chief Gen. Mohammed Zahir said.

The attack triggered a standoff that lasted more than four hours. Zahir said another four people were wounded, including two policemen.

The assault was the latest in the insurgents’ violent campaign against the country’s April 5 elections, when Afghans are to choose their next president and local council members. The Taliban have vowed to disrupt the polls.

Since campaigning began in January insurgents have attacked candidates’ convoys, their campaign workers and killed one election commission official. Also, an election observer from Paraguay was among the nine people who were killed last Thursday when the Taliban attacked the Serena Hotel in Kabul.

Fierce gunfire reverberated across the neighborhood of Karte Char throughout the afternoon Tuesday as heavily armed troops from the Afghan rapid response force surrounded the election office building, located near the home of presidential candidate Ashraf Ghani Ahmadzai.

Ahmadzai was not at home at the time and was not the target of the attack but the local office of Afghanistan’s Independent Election Commission, officials said.

Police official Sayed Gul Aga Hashmi said the assault started with one suicide bomber detonating his car, paving way for other attackers to storm inside the building, Hashimi said.

As the battle unfolded, an election commission official told The Associated Press first that there were about 20 election workers trapped in the building but later raised that figure to around 70 trapped. The official spoke on condition of anonymity because he was not authorized to talk to media. He said he had spoken to a colleague who was hiding inside the bathroom with seven others and who had told him there were more employees elsewhere in the building.

Police eventually rescued all but three – the slain candidate for the post of provincial council member, the election worker and the unidentified civilian.

The Taliban claimed responsibility in a statement to media, saying their target was the election office.

The building in Karte Char is in the southwestern Kabul, near the historic war-damaged Darulaman Palace built by Afghan King Amanullah. The landmark palace was heavily damaged during the Afghan civil war and stands empty.

Also Tuesday, insurgents carried out attacks on a bank in northeastern Kunar province and on an Afghan outpost in the eastern Khost province, on the border with Pakistan.

In Kunar, three insurgents with suicide vests stormed the government-owned Kabul Bank, killing two policemen and wounding three others who were guarding the premises in the provincial capital of Asadabad.

One attacker blew himself up and the other two were shot and killed by police, said provincial police chief Abdul Habib Sayidkhili. None of the bank employees or customers was hurt, including seven policemen who were there to collect their monthly salaries. They all hid in the basement during the attack, Sayidkhili said.

The Taliban took responsibility for the Khost attack.

In other developments, Afghan police said they detained eight senior employees of a private security company that provided guards to the Kabul hotel attacked by the Taliban last week.

The interior ministry said in a statement that the company employed by the Serena Hotel was negligent, which enabled the four attackers to hide small handguns in their shoes and avoid detection to enter the premises on Thursday evening.

The gunmen opened fire inside the hotel restaurant, killing nine people, including two children and four foreigners. The attackers were killed by police.