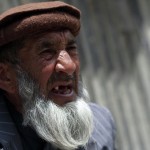 Beard size cannot exceed the size of its bearer’s fist, the council of ulama, or Islam lawyers, decreed on the request of the governmental Committee on Religious Affairs, Islamnews.tj reported.

The ulama also required female adherents to wear clothes covering the entire body except for face, hand and feet, the report said.

The requirements apply to followers of the Hanafi school of Sunni Islam, predominant in Tajikistan, said the report, published on Friday. No sanctions were specified for revealing clothes or longer beards, and moustaches appeared not to be subjected to any restrictions.

Tajik authorities have long been hard on beards, which are seen as an attribute of Islamic radicals. In 2009, all teachers under 50 years old were banned from growing beards, while their older colleagues were limited to 3 centimeters of facial hair.

State officials are required to shave in Tajikistan, and bearded men have reported problems securing employment, according to the International Religious Freedom Report for 2011 by the US Department of State. Police rounded up and verbally abused several dozen bearded men in the capital Dushanbe in 2011 as part of a raid against “suspicious men,” BBC Russia said at the time.