Islamabad, Jan 18, 2013: Tehrik-e-Minhajul Qauran chief Allama Tahir ul Qadri announced to lift the four-day siege of capital after he reached an agreement with the government. 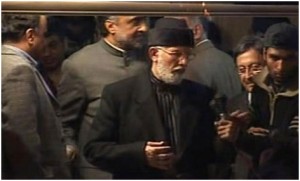 After successful negotiations with the government, he congratulated the participants of the sit-in, the nation as well as the ruling coalition for what he termed the successful culmination of the long march.

Addressing the participants of the sit-in, following the signature of the Prime Minister on what was termed as the ‘Islamabad Long March Declaration,’ Qadri lauded the participants for their struggle. “The march that started on Sunday and continued till today had become a great model for the world to see,” he added.

“It is a day of victory for the marchers and the nation alike,” he said.

Later, the long march ended peacefully and the participants started leaving the D-Chowk, the venue of the four-day long sit-down.

After the successful negotiations between the committee formed by the government and Tahirul Qadri, the declaration containing the terms agreed upon was signed by the Prime Minister and approved by the President.

Dr. Tahir ul Qadri also read the Islamabad Long March Declaration agreed between him and the government before the crowd.

According to the declaration, the National Assembly shall be dissolved at any time before March 16, 2013 (due date), so that the elections may take place within 90 days. One month will be given for scrutiny of nomination papers for the purpose of pre-clearance of the candidates under article 62 and 63 of the constitution.

The treasury benches in complete consensus with Pakistan Awami Tehreek (PAT) will propose names of two honest and impartial persons for appointment as Caretaker Prime Minister.

Issue of composition of the Election Commission of Pakistan will be discussed at the next meeting on Sunday, January 27, 2013, 12 noon at the Minhaj-ul-Quran Secretariat. Subsequent meetings if any in this regard will also be held at the central secretariat of Minhaj-ul-Quran in Lahore. In pursuance to todays’ decision, the Law Minister will convene a meeting of the following lawyers: S. M. Zafar, Waseem Sajjad, Aitizaz Ahsan, Farough Naseem, Latif Afridi, Dr Khalid Ranja and Hamayoun Ahsan, to discuss these issues. Prior to the meeting of January 27, the Law Minister, Mr Farooq H Naek, will report the results of this legal consultation to the January 27 meeting.

Electoral Reforms: It was agreed upon that the focus will be on the enforcement of electoral reforms prior to the polls on: (a) Article 62, 63 and 218 (3) of the constitution; b) Section 77 to 82 of the Representation of Peoples’ Act 1976 and other relevant provisions relating to conducting free, fair, just and honest elections guarded against all corrupt practices and; (c) The Supreme Court Judgement of June 8, 2012 on constitutional petition of 2011 must be implemented in Toto and in true letter and spirit.

With the end of the long march and sit-in, all cases registered against each other shall be withdrawn immediately and there will be no acts of victimisation and vendetta against either party or the participants of the march.

Following the successful talks, the crowd participating in the sit-in turned festive, men and women waved their hands in the air while others danced to the songs that blared off from the big speakers placed along side the sitting space.