Syrian warplanes raided Wednesday the outskirts of the eastern Lebanon border village of Arsal where rebels are believed to be hiding, security sources said.

The sources told The Daily Star Syrian jets fired a number of air-to-surface missiles into the barren terrain of Wadi Mira and Wadi Martabiya on Arsal’s edge around 10 a.m. 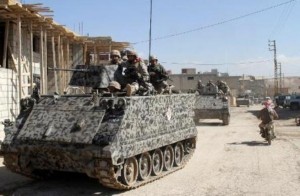 Arsal’s deputy mayor, Ahmad Fliti, said the warplanes struck the outskirts of an area between Arsal and the Syrian border village of Flita.

There were no immediate reports of casualties.

The targeted region is known for harboring fighters belonging to various Syrian opposition factions,including the Nusra Front, the Islamic State of Iraq and Syria and the Free Syrian Army, acoording to a security source.

The source said the fighters have been on high alert in anticipation of attacks against them to be undertaken by one of three parties: the Syrian military, Hezbollah or the Lebanese Army.

After the Syrian army, backed by Hezbollah forces, regained control of the region of Qalamoun on the border with Lebanon, hundreds of militants were forced to flee to Lebanese territory.