Sydney (Tribune International); The Sydney Opera House will be lit up in red in celebration of Chinese New Year this weekend, NSW Premier Barry O’Farrell said. 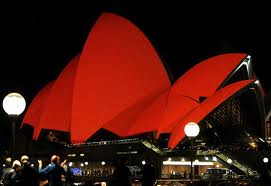 Mr O’Farrell said the sails of the world famous Sydney Opera House would turn red to mark the arrival of the Year of the Snake on Sunday.

“The Sydney Opera House is one of the world’s most recognisable buildings and I’m delighted for the first time it will also be a focal point for Chinese New Year,” said Mr O’Farrell who was joined at the event by H.E. Duan Jielong, Consul General (ambassadorial rank) of the People’s Republic of China in Sydney.

“Sydney is one of the globe’s most culturally diverse cities – Sunday’s event will show the world our appreciation of the Chinese community’s contribution to Sydney.

“Red is not only the traditional Chinese colour but it is also one of the lucky colours for this year of the Water Snake.

“The relationship between China and NSW is strong and we are committed to forging even closer economic and cultural ties.

“The Chinese were among our earliest immigrants, first recorded in 1827, and have played primary role in Sydney’s and NSW’s development.

“Later this year I’ll be making my third trade mission to China as Premier to build on our existing trade relationships and explore new opportunities for NSW businesses.

“Sydney is also a favourite destination for Chinese tourists with more arriving from China than any other nation.

Minister for Citizenship and Communities Victor Dominello said Chinese New Year has grown into one of Sydney’s biggest festivals.

“One of the great strengths of our multicultural society is the capacity to share our cultural riches with one another.”

Louise Herron, CEO, of Sydney Opera House said the lighting up of the sails is a wonderful opportunity to reflect Sydney back to itself.

“Lighting the sails for Chinese New Year underlines Sydney Opera House’s embrace of our many visitors as well as NSW’s broad and diverse community.

The Sydney Opera House is already decked out in celebration of Chinese New Year from the foyer to the lower concourse.

On Sunday and Monday a traditional lion will also be roaming the Opera House boardwalks.