SYDNEY Airport says it’s well placed to capitalise on traffic growth after more than doubling its first half profit.

THE company made a $53.9 million net profit in the six months to June 30, up from $24 million in the same period last year. 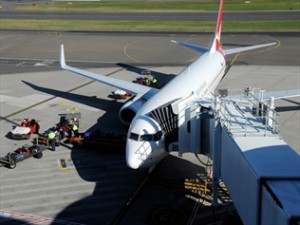 The results come less than a week after the company agreed to consult the government on the Western Sydney Airport at Badgery’s Creek, which the owners of the company have a right of first refusal to operate.

The company said it was well placed to take advantage of future traffic growth after refinancing in May.

” Sydney Airport is well positioned to capture future traffic growth and commercial opportunities,” the company said in a statement.

“All management initiatives including the duty free retender and ground transport programme are on track and progressing well.”

The company’s total revenue was up 5.7 per cent to $568.4 million partly driven by strong international passenger growth, especially during Easter and Chinese New Year.

The strongest growth came from the Hong Kong and Chinese markets, which grew by 17 and 15.8 per cent respectively.

Increased services from a number of airlines are expected to push growth in the second half and into 2015.

Shareholders have been paid an interim dividend of 11.5 cents per share up from 11 cents the same time last year.