Voters expected to say “no” to union-initiated referendum that would raise basic income to more than $4,000 a month. 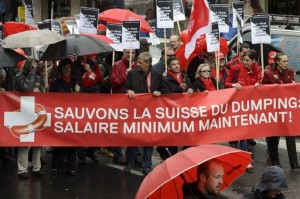 Switzerland is to hold a referendum on whether to raise the minimum wage to nearly $25 an hour, the world’s highest.

Surveys suggest that Sunday’s vote will end with two-thirds of Swiss voters rejecting the motion. Critics argue that such a high minimum wage could damage the economy.

“I will vote against because I think it is very difficult for students to find small jobs or let’s say, for example, a farmer wants to hire someone in his farm, if he has to pay 4000 Francs [$4,515] a month minimum and he doesn’t have it, he won’t be able to hire,” Yuri Ortelli, a Swiss voter, told the Reuters news agency.

But supporters say the move is justified by high living costs. They add that higher basic wages would boost the buying power of some 330,000 people, or one in 10 employees in Switzerland.

The Swiss Trade Union Federation submitted the referendum “to protect equitable pay” in 2012 in keeping with Switzerland’s tradition of direct democracy.

Voters in the country who collect 100,000 signatures can force a binding referendum on any issue.

On Sunday, the Swiss will also be voting on a multi-billion-dollar deal to buy fighter jets from Sweden.

Critics argue Switzerland does not need new fighter jets and warn they could end up costing far more than the country has bargained for.

The government and other supporters meanwhile been campaigning hard to stress the importance of the new planes for Swiss security, and observers say the scale could still tip in their favor.