ROGUE MP Geoff Shaw has apologised to Victorians, despite saying he was “screwed by the parliament”. 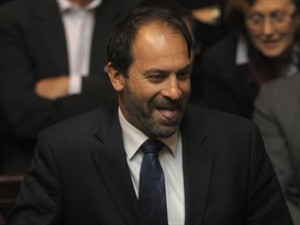 HEADLINING a comedy event at Melbourne’s Wheeler Centre on Friday, Mr Shaw was asked if he would say sorry for misusing his parliamentary entitlements.

He was suspended on Wednesday night until September 2, ordered to apologise and repay more than $6800.

When asked what he thought of his suspension, he replied: “(I was) screwed by the parliament, wasn’t I?”

Mr Shaw said he “probably shouldn’t have” done a radio interview where he said he would vote no confidence in the government.

It led to an opposition push to expel him from parliament before the government suspended him.

“I don’t know if I regret it but I didn’t expect what came after,” he said.

Mr Shaw said Victorian premier Denis Napthine had suspended him despite “investigation after investigation” clearing him of wilfully misusing his car.

Mr Shaw also didn’t back away from his pro-life position on abortion and the “sin” of homosexuality, which attracted some jeers from the crowd.

He detailed his conversion to Christianity at 25 after he was healed of a knee injury at a church service.

Earlier on Friday, Dr Napthine said Mr Shaw needed to have a “good look in the mirror”, and should not wait until the end of his suspension to show the Victorian public he was sorry.

Sammy J brought a mirror out on stage for Mr Shaw to look into – which he did before delivering his apology.

He said he would look at the polls before deciding to re-contest the November state election.

Earlier, Dr Napthine said he was waiting for a sign of contrition from the suspended independent MP.

“I have no plans to talk to the member for Frankston,” Dr Napthine said.

Mr Shaw’s suspension has left the Victorian government and opposition deadlocked on 43 votes apiece in the lower house, with the government requiring the Speaker’s backing to pass legislation.