Rights group files case over 2002 religious violence in Gujarat against prime minister ahead of his visit to the US.

A human rights group in the United States has sued Indian Prime Minister Narendra Modi for what it says was his complicity in violence in the western state of Gujarat in 2002. 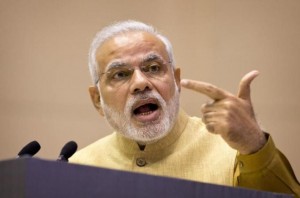 The American Justice Center filed the lawsuit on Thursday in a New York federal court on behalf of two unnamed survivors of the religious riots in Gujarat, of which Modi was the chief minister at the time.

The suit was filed just hours ahead of Modi’s first visit to the US as the prime minister.

The plaintiffs are seeking monetary and punitive damages. They also seek a judgement that Modi’s conduct amounted to genocide.

In a statement, India’s Ministry of External Affairs said that the case was a “frivolous and malicious attempt to distract attention from the visit”.

“The allegations in the case are baseless and similar to other such allegations made in the past against the Prime Minister,” the statement posted on the ministry’s website read. “It is unfortunate that vested interests are raking up the matter only to vitiate the atmosphere during the visit. Appropriate steps are being taken to address the matter.”

Modi was elected India’s prime minister in May. He arrived on Friday in New York and is scheduled to meet privately with Mayor Bill de Blasio. Modi is also expected to hold a sold-out appearance at Madison Square Garden.

The prime minister’s five-day trip is tightly packed: He will be meeting President Barack Obama and a number of top American officials, addressing the UN General Assembly, and interacting with the heads of major US companies and influential Indian-Americans.

There was no immediate comment from Indian government officials, many of whom were travelling with Modi.

He has denied any role in the violence, and India’s Supreme Court said there was no case to bring against him. But suspicions were enough for the US to refuse him a visa in 2005.

As it became clear that Modi would become prime minister, however, the US lifted the visa ban on him. Washington has since tried hard to court the prime minister.