NEW DELHI: Once again Kashmir students came under attack by Hindu extremists at an educational institution in India. Three Kashmiri students were beaten up at a private university in the city of Greater Noida in Uttar Pradesh for not shouting anti-Pakistan slogans. 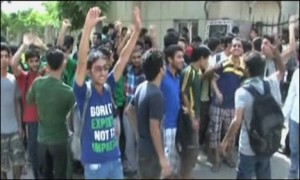 The incident took place at a common hostel for universities in Greater Noida when the extremists barged into the room of the Kashmir students and forced them to shout slogans against Pakistan. The Kashmiri students were brutally beaten when they refused to chant the slogans.

According to one of the students after such attacks Kashmiri’s did not feel safe at educational institutions in India.

Following the attack, students protested outside the university hostel complaining that the police did not respond to their complaint on time.

The attack came a few months after 67 Kashmiri students were suspended from a university in Uttar Pradesh for celebrating Pakistan’s win against India in the Asia Cup.