Foreign minister says nation does not submit to jurisdiction of inquiry into alleged war crimes during civil conflict. 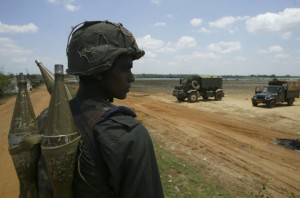 Sri Lanka will not co-operate with a United Nations inquiry into alleged war crimes by government forces and separatist Tamil Tiger rebels in the final phase of their 26-year war, its foreign minister has said.

The UN, through a United States-led resolution, last month set an international inquiry into the alleged war crimes and
human rights abuses after the island nation’s government had failed to investigate them properly.

Gamini Lakshman Peiris, the Sri Lankan foreign minister, on Monday said the government had not accepted the UN investigations due to concerns over legality, fairness, and some conflict of interest issues.

“Where the government is required to do anything to support the investigation or to participate in it, the government will
not do that,” Peiris said. “Nobody can come here without the co-operation of the Sri Lankan government.”

However, the government will not prevent anybody from giving evidence to any such investigation as there could be various views from different people, he said.

A UN panel has found credible evidence that around 40,000 mainly ethnic minority Tamil civilians were killed in the final phase of the war due to indiscriminate shelling, mostly by the army.

It is still not clear how the UN would conduct its probe, Peiris said.

“They will have to tell us what they want to do. But the clear policy decision had been taken that we do not associate ourself with the inquiry and we do not submit to the jurisdiction of the investigating committee,” he said.

He insisted Colombo would press ahead with its own reconciliation process five years after crushing Tamil Tiger rebels and declaring an end to 37 years of ethnic war which the UN estimates claimed at least 100,000 lives.

Many rights organisations in the past have complained that Sri Lanka had rejected their visa requests, but the government has rejected the claims.