COLOMBO: Former captain Mahela Jayawardene was given a fairytale sendoff in his last test match as Sri Lanka eased to a 105-run victory that completed a 2-0 series sweep over Pakistan on Monday.

The victory enabled batting stalwart Jayawardene to end his 149-test career with a victory on an emotional day for the 37-year-old, who scored 11,814 runs at an average of 49.84. 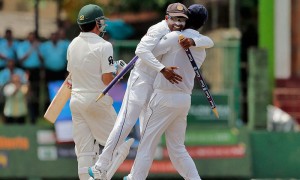 “Thank you so much for all the wishes! Got up and realized it’s my last day. Bit emotional but the journey has been great!” Jayawardene tweeted before play began as he pouched two more catches to finish with a world record test tally of 205.

After ripping through the Pakistan order the previous evening, Sri Lanka were forced to wait for nearly an hour before capturing the last two wickets with Ranagana Herath claiming his 14th victim of the match to dismiss the tourists for 165 in their second innings.

Wahab Riaz was the last man out for 17 when he top edged a delivery from Herath to cover that Kaushal Silva held on to despite colliding with Kumar Sangakkara, who was also attempting to catch the ball. Junaid Khan did not bat due to injury.

At the fall of the final wicket, all thoughts turned to the departing Jayawardene, who first met with his parents and Sri Lankan President Mahinda Rajapaksa in his VIP suite before returning to the field to be hoisted on the shoulders of his team mates and carried around the ground.

Earlier, Chanaka Welegedara dismissed the last front line batsman when Sarfraz Ahmed, having completed his fourth fifty in as many innings, attempted to sweep the paceman from outside off stump and hit the ball straight to Sangakkara at square leg.

Saeed Ajmal was left three not out as Herath took another five wickets to add to his nine in the first innings for a career best match return of 14-184.

The two teams will now clash in three one-day internationals starting on August 23.