Seoul (Tribune International Correspondent): The Embassy of Sri Lanka in Korea in association with the Sri Lanka 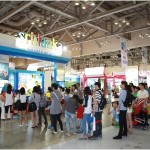 Tourism Promotion Bureau organized Sri Lanka’s pavilion at the 16th Busan International Travel Fair (BITF) from the 6th to 9th September 2013. BITF is the largest travel exposition in Busan, the second largest city in Korea after Seoul. Additionally, it attracts international and national tourism organizations including 430 local and foreign exhibitors representing 43 foreign countries, 14 of which are Asian nations.

All major tourist destinations of Asia including Thailand, India, China, Japan, Malaysia, and the Philippines, strongly represented at the fair. The 95,000 visitors to the fair consisted of professionals from the tourism industry as well as the general public who aimed to discover potential travel destinations for their future vacations.

Sri Lanka’s pavilion portrayed the island’s tourism themes from its heritage to its culture. As a result, the pavilion earned high praises from visitors and won the Best Tourism Marketing Award from KOTFA. Complimentary cups of Ceylon tea were available to visitors along with fun games and opportunities to win gifts after participating in a tourism survey about Sri Lanka.

In parallel to BITF, a tourism promotion seminar was arranged on 6th September at the Haeundae Centum Hotel. The event was well attended by Korean tour operators and tourism and Buddhist associations based in Busan. During the seminar, attendees were briefed on Sri Lanka as an ideal tourism destination, particularly as a key site for Buddhist tourism.

During 2012, Korean tourist arrivals in Sri Lanka remarkably increased by 43% in comparison to the previous year. In 2013, with the commencement of direct flights by Korean Air between Colombo and Seoul and along with tourism promotional opportunities like the BITF, Sri Lanka hopes to continue to enjoy a growth in the tourism sector and spread its culture and heritage to the world.