Fifteen crew members of a South Korean ferry the Sewol that sank in April killing more than 300 people, mostly children, have gone on trial on charges ranging from negligence to homicide. 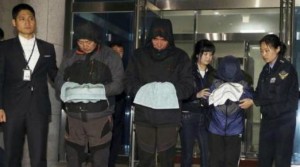 Mourning family members packed the court on Tuesday in Gwangju, the closest city to the scene of the disaster, as the 15 were led in and seated in two rows of benches.

One relative held up a sign that read: “You are not human. You are beneath animals.”

An altercation arose between the relatives and court security guards who tried to take the sign away, Reuters news agency reported.

Some of those families want to see a change in Korean law to allow those accused of lesser crimes to be charged with greater sentences.

The 15 have been in detention since their indictments and appear to have been tried and convicted by an angry public even before the trial began.

“Not only do we have this public pressure, we also have these atypical charges of murder, and President Park Geun-hye publicly calling the crew murderers.” our correspondent said.

Most of the Sewol‘s passengers were children from the same school on a field trip who stayed in their cabins as they were told while surviving crew members, including the captain, were caught on video abandoning ship.

Almost two months after the sinking of the Sewol, 292 bodies have been retrieved and 12 others are listed as missing.

The captain and three senior crew members were charged with homicide in May facing a maximum sentence of death.

Two are charged with fleeing and abandoning the ship, which carries a maximum sentence of life in prison.

Nine are charged with negligence, that also carries a maximum sentence of jail.

The last execution in South Korea was in 1997.