SINGAPORE – Lee Kuan Yew, the founding father of modern Singapore and one of Asia’s most influential politicians, has died at age 91, according to the Singapore Prime Minister’s office.

Lee Kuan Yew’s death triggered a flood of tributes to the man who oversaw the tiny city-state’s rapid rise from a British colonial backwater to a global trade and financial center.

During more than a half-century as Singapore’s leader, he helped turn the city-state from a sleepy British colony into an affluent and efficient trading enclave, which enjoys the world’s third-highest per capita GDP.

Lee was hospitalized on Feb. 5 with severe pneumonia and later put on a ventilator.

“He is my idol, and not a day passes without my saying it,” said Vasuki Thirupathi, an engineer from India who worked in Singapore two decades ago and was back on a visit. “Security, law and order, truth, honesty — all of this requires vision and boils down to leadership.”

“Singapore has become a First World country,” he added. “That’s not a simple thing to do.” 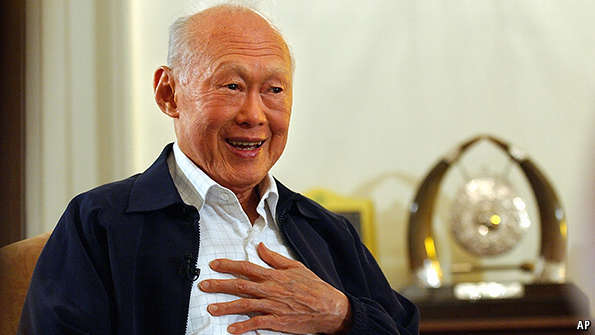 Mr. Lee led Singapore from 1959, through its tumultuous separation from Malaysia in 1965, and remained at the helm until 1990, an era in which it rose “From Third World to First,” as he titled his 2000 book on the former British colony’s modern history. He remained a statesman and an adviser to world leaders for more than two decades after stepping down as prime minister.

For older Singaporeans, the roots of the respect for Mr. Lee were intertwined with their rise from poverty. Zhuang Yaying, a 79-year-old who paid her respects on Monday, spoke of living in a thatch-roofed house when she was young. “Singapore is like heaven now,” she said. She mentioned “proper” sidewalks and the ubiquitous high-rise apartment complexes.

Lee became Singapore’s first prime minister in 1959, while it was still a British colony but had been granted a measure of sovereignty. It joined neighboring Malaysia, another former British colony, in 1963. The following year riots between ethnic Chinese and Malays broke out, and Singapore and Malaysia split into separate nations in 1965.

At a press conference that year, Lee predicted he would always look back on this moment in anguish.

“The whole of my adult life,” he said, pausing to bite his lip and dab his eyes, “I have believed in merger and the unity of these two territories. You know that we, as a people, are connected by geography, economics, by ties of kinship.”

Two threats from that era shaped Lee’s views and policies. The first was the specter of communist insurgencies that shook Malaysia and Indonesia. The other was threat of racial conflict.

Like its neighbor Malaysia, Singapore is a multi-ethnic, multicultural country: about 76 percent Chinese, 15 percent Malay and 7 percent Indian.

Whereas Malaysia supports ethnic Malays through affirmative action policies, Lee always rejected that approach. Instead, the Singaporean leader advocated meritocracy, which was reflected in the country’s well-respected civil service.

Michael Barr, a Singapore expert at Flinders University in Adelaide, Australia, says this had to do with Lee’s views on race and culture.

“In his view, meritocracy would always result in Chinese rising to the top,”
Barr says. “He regarded the Malays as being at the bottom of a hierarchy of races, with Indians and especially Chinese above them.”

Even after stepping down as leader in 1990 – signing off as the world’s then longest-serving prime minister – the acerbic Lee stayed on in the cabinet until 2011 and was a member of parliament until his death.