Mr Modi said in a Tweet on Thursday he was happy to receive a sari for his mother from Mr Sharif, a return gift in a way for the Indian prime minister’s gesture of sending a shawl for Mr Sharif’s mother.

“Nawaz Sharif ji has sent a wonderful white Sari for my Mother. I am really grateful to him & will send it to my mother very soon.” 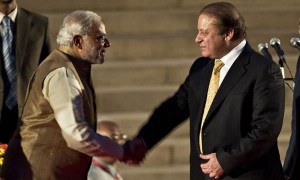 On a less private note the two leaders will have plenty of work to finish before they meet at the Saarc summit in Kathmandu in November. Mr Sharif said recently that the summit agenda will be hydrocarbons and energy cooperation. Such cooperation has been discussed and speculated on with big Indian business houses, including those that supported Mr Modi’s election campaign, seen as keen to do business in Pakistan.

Given Mr Modi’s style of shunning media scrutiny, the journey from now till they meet in New York, will find the prime minister’s exchanging more than saris and shawls for their mothers. There is a whole gamut of business and political issues to earmark.

On the US front, Mr Modi has accepted an invitation from Mr Obama to have bilateral discussions in Washington in September, potentially opening a new chapter in a sometimes edgy relationship between the two countries.

Reports quoted government sources in Delhi as saying that the United States has offered September 30 as the date for the meeting, and the Indian side has asked for it to be advanced to September 26, around the time of Mr Modi’s maiden address at the United Nations General Assembly.

S Jaishankar, the Indian Ambassador to the United States, is flying to New Delhi on June 8 for consultations with South Block and the Prime Minister’s office, and will brief Mr Modi on the relationship and how to take it forward, The Hindustan Times said.

“The meeting between Modi and Obama will mean that the US view on the Indian PM has come full circle from the time it imposed a visa ban on him in 2005 in connection with the Gujarat riots three years earlier,” the paper said. The process of rapprochement started in February, when its recently retired ambassador to India, Nancy Powell, went to Ahmedabad to meet Modi, then a PM candidate.

It also comes after an especially difficult period in the relationship, sparked by the arrest and humiliation of Indian diplomat Devyani Khobragade in New York over allegations of visa fraud, and a particularly sharp retaliation by the Indian side.

But there could be a meeting of minds on economic ties, the Hindustan Times said. Mr Modi has spoken often of the need to make India’s diplomacy trade-focused, and wants big ticket investments from mega corporations like GE, IBM and Microsoft.

The US companies, while broadly enthusiastic about India, have turned skittish of late due to stalled economic reforms, slow growth, and issues over tax, intellectual property and preferential market access.

With Modi becoming the prime minister, the Indian embassy in Washington has started serious diplomatic efforts to lure investment. For their part, some US defence contractors are keen to sell military hardware to the world’s biggest arms importer.