German coach believes Neymar’s absence could make Brazil stronger as the two sides prepare to meet in the semi-final. 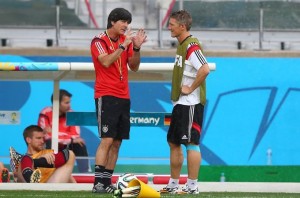 Brazil will grind to a halt when the hosts, missing injured talisman Neymar and suspended captain Thiago Silva, take on European heavyweights Germany in their World Cup semi-final in Belo Horizonte.

Neymar fractured a vertebra in the quarter-final against Colombia is out for the rest of the tournament, while centre back Silva picked up a needless booking that means his World Cup will also be over unless Brazil can progress to Sunday’s final against Argentina or the Netherlands who meet on Wednesday.

For Brazil, failure to reach the showpiece match at Rio de Janeiro’s Maracana stadium would be a national catastrophe. The South Americans beat Germany to win the 2002 final.

The Germans, who dispatched France in the last-eight, have shown their usual ruthless efficiency in reaching the semi-finals for the fourth consecutive World Cup but are without a triumph since 1990 and a major title since winning Euro ’96.

And the double absence could make the hosts stronger, according to Germany coach Joachim Loew.

“No one should think that Neymar’s absence or Silva’s absence is a drawback,” said the Germany coach. “With (central defender) Dante playing for Thiago Silva you can’t expect him to play badly especially against Germany.”

“For the other players there will be powers that will be released in this game. A top player missing means other players take responsibility and I am sure they will play for Neymar and for the entire country.”