BANGKOK (Thailand) — A series of explosions targeting some of Thailand’s most popular resort cities and beach towns killed at least four people and wounded dozens on Friday.

Five provinces in Thailand have been hit by thirteen bombings in less than a day, according to authorities.

Two bombs went off in the resort of Hua Hin Friday morning near the clock tower, a city landmark and two small bombs exploded in the tourist beach town of Patong on Phuket Island, and two more in Phang Nga, another tourist region in the south, one Thai man was lightly wounded in Patong, police officials said.

The Thursday night blasts in Hua Hin have spaced roughly 45 minutes apart. The injured included three Italians, three Dutch nationals, three Germans and one Austrian, according to a police report. The rest were mostly Thai street vendors in the area.

Thailand’s Prime Minister Prayuth Chan-ocha has ordered emergency security measures after the country was hit by a series of bomb blasts. The prime minister has urged law enforcement agencies to beef up security – especially at tourist destinations and other landmark areas.

No one has claimed responsibility for the blasts. However, the timing and scope of the attacks suggested the bombs were set off by opponents of the Southeast Asian nation’s ruling junta, which last weekend organized a successful referendum on a constitution that critics say will bolster the military’s power for years to come.

“These incidents are different from the usual terrorism acts, they are more local sabotage on certain locations and provinces,” Deputy Police Spokesman Maj. Gen. Piyapan Pingmuang said at a news conference Friday.

The explosions all occurred south of Bangkok and several of the blasts – including one on Patong beach in the tourist town of Phuket, three in the seaside resort city of Hua Hin – appeared designed to strike the tourism industry.

Thailand’s economy has sagged since the military seized power in a 2014 coup. But tourism has remained one of the few bright spots, with more than 14 million people visiting in 2016 so far – up from 12.5 million the year before. 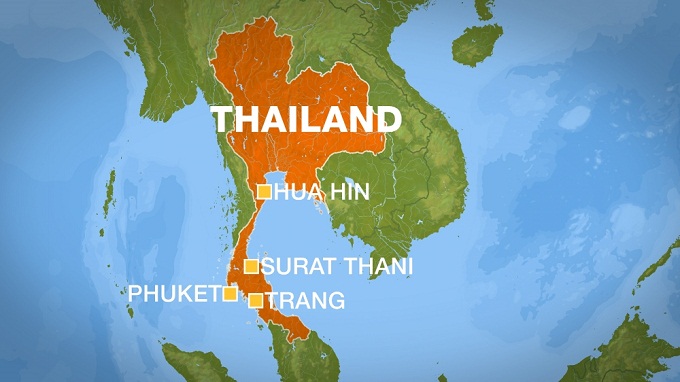