A new delivery robot could help reduce the price paid for deliveries – and possibly make them free in the future.

The robot, developed by one of the original founders of Skype, drives autonomously to the shopper’s doorway and then texts an alert message to announce its arrival. The low speed robot is designed to drive for a few miles from a local hub or a shop and can only carry small loads.

“Our vision revolves around three zeroes—zero cost, zero waiting time and zero environmental impact,” Heinla said in the release. “We want to do to local deliveries what Skype did to telecommunications.”

The company says that the robots can carry the equivalent of two grocery bags, delivering them within five to 30 minutes from a local hub or retail outlet, cutting down last-mile delivery costs. A real-time mobile app will allow a shopper to track his or her robot’s location and unlock goods on arrival.

Launched on Monday by former Skype co-founders Ahti Heinla and Janus Friis, London- and Tallinn, Estonia–based startup Starship Technologies was founded “to fundamentally improve local delivery of goods and groceries, making it almost free,” according to a press release.

The delivery robot rives on pavements at an average speed of 4mph, and uses proprietary mapping and navigation technology to avoid crashing into obstacles, (check out the video we made).

Starship is currently testing and demonstrating prototypes of the robot, and plans to launch pilot services in the UK in 2016. Mr Heinla said the robots are primarily intended for use in suburban areas. One of the first pilot areas will be Greenwich in East London.

Customers will be able to book deliveries and track the robot’s progress on their mobile phone in real time. The cargo space will remain locked and secure until the robot arrives outside the customer’s front door. The customer can then unlock it using their mobile app and retrieve their groceries.

Heinla says the battery-powered robots need less energy than most light bulbs, and are capable of delivering the equivalent of two grocery bags within 5-30 minutes from a local hub or store, 10 to 15 times cheaper than the current delivery alternatives.

“We want to do to local deliveries what Skype did to telecommunications,” Heinla said. 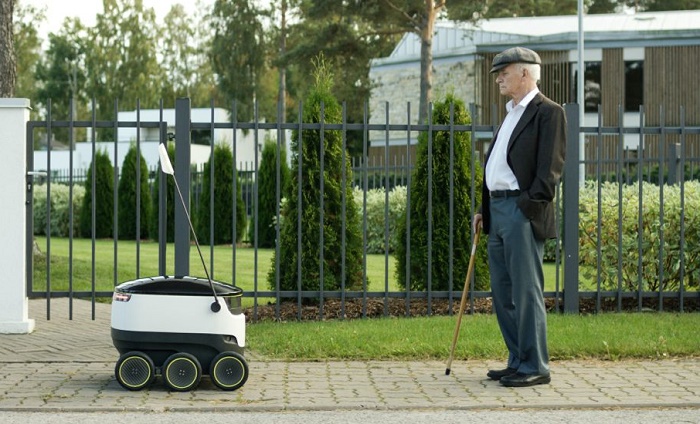