AN earthquake measuring 7.8 rocked northern Chile yesterday, a day after a deadly 8.2 jolt in the same region, authorities said. 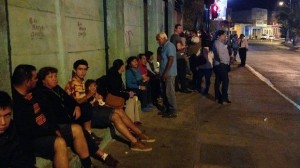 Sirens rang as a tsunami warning was issued and thousands of people in the north — including President Michelle Bachelet — were again ordered to evacuate inland from coastal areas.

Peru to the north also declared another tsunami warning, according to its navy. The new temblor struck at 11.43pm (1.43pm AEDT), 20km south of the city of Iquique, the navy’s alert service said.

“Based on its strength, a tsunami warning has been issued,” the Chilean national oceanographic agency, SHOA, added. There were no immediate reports of fatalities or major damage from the new quake.

Ms Bachelet, who was assessing damage in the northern city of Arica, far north of the capital Santiago, was among those evacuated to higher ground, said state- run TVN.

Thousands of Chileans had just returned home after spending the night on hills following Tuesday’s magnitude-8.2 earthquake, which killed six people and sparked tsunami fears as far as Japan.

Small tsunami waves hit northern Japan yesterday. The Japan Meteorological Agency said waves of up to 40cm were monitored in Kuji, in the Iwate prefecture.

In Chile, police and soldiers patrolled the streets to prevent looting after nearly one million people evacuated their homes along the lengthy coast.

The chaos — and a collapsed wall — allowed some 300 inmates to escape a women’s prison in Iquique, the city closest to the quake’s epicentre.

Authorities said 110 of them had been recaptured.

About 2500 homes were damaged in the town of Alto Hospicio, near Iquique, the National Emergency Office said.