Overloaded ferry sinks in central Bangladesh, leaving up to 150 people missing after rescue of 50 passengers. 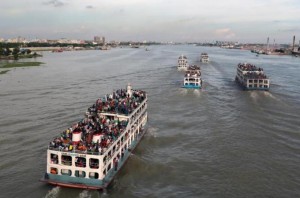 An overloaded passenger ferry carrying up to 200 passengers has sunk on a river in central Bangladesh, police have said.

They said 50 passengers had been rescued after the boat sank around 30 kilometres south of the capital Dhaka on Monday.

The ferry began its journey in Madaripur and was believed to be carrying between 170 and 200 passengers.

“We have heard that the ferry was overloaded with passengers and the river was rough,” local police chief Tofazzal Hossain told AFP.

Ferry accidents are common in Bangladesh, with overcrowding, and poor ship design and maintenance often to blame.

Bangladesh has more than 230 rivers and boats are the main form of travel, especially in the southern and northeastern regions.