Jordan is doing its best to cope with the large number of Syrian refugees, but the international community should work to end the conflict in Syria, Saudi Prince Al Waleed Bin Talal said during a visit to the Zaatari Refugee Camp. 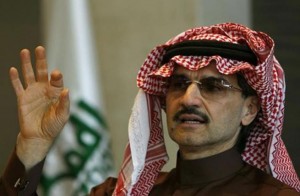 “Jordan is doing its best in alleviating the sufferings of the 1.3 million refugees [who have found sanctuary] in the country but, at the same time, the international community has to work on finding a final solution for the crisis in Syria,” the Saudi billionaire told reporters.

Jordan, Lebanon, Turkey and Iraq have taken in the majority of the 2.5 million Syrians who fled their country since the onset of the conflict in March 2011, with around 600,000 of them living in the Kingdom, according to UN figures, but unofficial figures suggest they could amount to one million.

“What I saw today is heartbreaking but at the same time I appreciate what Jordan and the UN agencies have done because the services provided are the best possible,” the Saudi prince said after visiting families and camp facilities with UNICEF officials.

The Zaatari camp in Mafraq, some 80km northeast of Amman, has grown since its inception as a desert camp of 5,000 to the Kingdom’s fourth largest population centre with about 107,000 residents.

The prince, a nephew of Saudi Arabia’s King Abdullah and the owner of international investment firm Kingdom Holding, is a closely watched figure in international markets with investments spanning from Citigroup, Rupert Murdoch’s News Corp., to Twitter and General Motors.

Prince Al Waleed has been funnelling support to Syrian refugees since 2012 via his philanthropic foundations and UN agencies like UNICEF and UNHCR with donations totalling 7.5 million Saudi riyals (around JD1.4 million or $2.4 million).

“We have been following and supporting the refugees’ cause for a long time. We are very familiar with what is happening. I thought we should be here personally to evaluate the situation and see first-hand, and I was really impressed by the services provided by the government…” the prince said.

“Jordan, together with UN agencies and the support of the whole world and — more specifically — the Arab world and Saudi Arabia, has managed to create a lot of comfort for the refugees.

“However, no matter how welcoming Jordan is, we all hope they will go back to their country as they are putting pressure on a country with limited resources,” he added.