Colombian President Juan Manuel Santos has won a second term, beating right-wing challenger Oscar Ivan Zuluaga in a vote that will allow peace talks with FARC rebels to continue and seek an end to five decades of war. 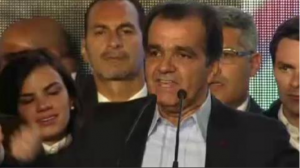 With more than 98 percent of the runoff vote counted on Sunday, centre-right Santos led over economist Zuluaga with 50.8 percent compared with 45.1 percent.

Santos, who hails from one of the country’s most influential families, opened talks with rebel leaders of the Revolutionary Armed Forces of Colombia (FARC) in late 2012 to end a conflict that has killed more than 200,000 people and forced millions more from their homes.

He made the pursuit of peace the centrepiece of his campaign, and cast the election as a choice between peace and war.

“This is the end of more than 50 years of violence in our country and it is the beginning of a Colombia with more justice and social inclusion,” Santos told cheering supporters in his victory speech. He vowed to “dedicate all my energies and all the energies of my government” to sealing an accord.

Arlene Tickner, a columnist for El Espectador, told Al Jazeera that Santos’ plan to conclude the negotiations with FARC was highly improbable for real progress, especially since he just announced a new peace process with the country’s second-biggest rebel group, the National Liberation Army.

Although they have shown more progress than previous failed efforts, the peace talks in Cuba have been divisive.

Zuluaga has accused Santos of negotiating with “terrorists” and in his campaign, he pledged new conditions on FARC, like prison terms, for serious crimes and a ban on political participation.

The rebels have said they will not go to jail and refuse to down their weapons until peace is signed.

Zuluaga made no such claims in his concession speech a few hours earlier.