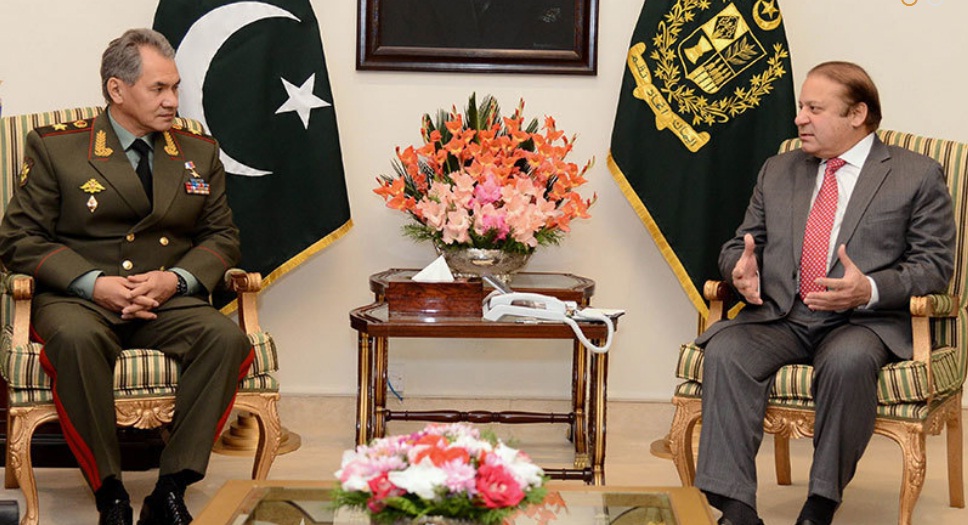 Islamabad – During the first-ever visit of a Russian defence minister to Islamabad, Pakistan and Russia on Thursday signed a milestone agreement to enhance cooperation in the defence field.
The agreement came at a meeting between the defence ministers of the two countries at Defence Ministry building in Rawalpindi. Both sides stressed the need for continuation of momentum gained during Moscow conference and expressed satisfaction over convergence of views on most of international and cross-regional issues.
Later, talking to media persons, Defence Minister Khawaja Asif said the visit by Russian counterpart Sergei Shoigu is taking place at very critical juncture. He said apart from promoting bilateral defence relations, visit will enable both countries to join hands in bringing peace and stability in the region. He said Russia is a key player in the region and “we look forward to strengthen bilateral relations in different fields”.
Russian Defence Minister Army General Sergei Shoigu said “our next step will be signing of an MoU to promote cooperation between the navies of two countries”. He said Russia wants peaceful solution to all problems in the region.
General Sergei Shoigu appreciated the skill and expertise of Pakistani armed forces in fighting the war against terrorism. He also appreciated the defence production side stating that IDEAS itself signifies the leap Pakistan has taken in manufacturing defence equipment. “The world community not only praises but wants to do business with Pakistan now”.
General Sergei Shoigu made a day long visit to Pakistan on the invitation extended by his Pakistani counterpart to attend the signing ceremony of agreement between the ministries of defence of the two states. The first ever visit of the defence minister from Russian Federation has come at a very critical juncture when US led Nato forces are drawing down from Afghanistan by the end of 2014.
During his stay, the visiting dignitary also held in-depth delegation level talks with Pakistani authorities besides calling on the prime minister. The visiting dignitary was accompanied by a 41-member delegation. He was received by Defence Secretary Lt-Gen (r) Muhammad Alam Khattak and Defence Production Secretary Lt-Gen (r) Tanvir Tahir.
Pakistan and Russia had useful interaction in the past which helped in understanding the security perspective of regional countries. Both Pakistan and Russia stressed on continuation of momentum gained during Moscow Conference and expressed satisfaction over convergence of views on most international and trans-regional issues.
Earlier during the meeting, Khawaja Asif appreciated Russia’s overtures in enhancing bilateral relations with Pakistan. He added that strong ties between Pakistan and Russia will help in brining stability and prosperity in the region. The signing of the military cooperation agreement between the two significant countries of the region is a milestone, he said. “Both sides will translate this relationship in tangible terms and further strengthen military to military relations”.
Both sides expressed hope that the agreement will pave the way for exchange of views and information on politico-military issues and well as issues related to strengthening of mutual trust and international security, intensification of counter-terrorist and arms control activities, extension of relations in various fields of military education, exchange of experience in peacekeeping and interaction in peace-supporting operations under the United Nations auspices, extension of relation in military medicine, history, topography, hydrography and military culture.
Agencies add: “The prime minister stressed upon the need to increase bilateral trade between the two countries which currently stands at $542 million and does not correspond to their trade potential,” the prime minister’s office said in a statement after Shoigu-Sharif meeting.
Sharif invited Russian companies to invest in Pakistan, particularly in the energy sector and benefit from the business-friendly policies of the government, it added. “Pakistan is keen to enhance its multi-dimensional relations with Moscow, including defence,” Sharif said.
Russia will also supply Pakistan Mi-35 helicopters. Russia’s ITAR-TASS news agency reported in June that the country had lifted its embargo on arms supplies to Pakistan and was holding talks on supplying Islamabad with combat helicopters.