Banning of food imports from the US and the EU likely to heighten tensions over the conflict in Ukraine.

Russia has banned most food imports from the United States and the European Union in obvious retaliation to tough Western sanctions against it over its role in neighboring Ukraine. 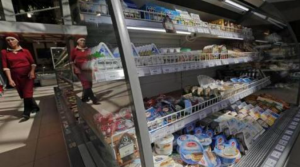 The ban exempts only baby food and will last one year unless “our partners demonstrate a constructive approach” with regards to sanctioning Russia, he said.

“I hope that the economic pragmatism of our partners will win over lousy political motives,” he said.

With Russia importing 35 percent of its food, consumers are likely to feel the impact unless other suppliers can quickly be found.

Analysts at London-based Capital Economics said Russia imported last year $9.5bn worth of the goods on the list from the sanctioned countries, out of $25bn spent on those goods.

The EU will be worst hit as sales of those products accounted for $7bn of the $16bn in food it exported to Russia last year.

The EU said the measures were “clearly politically motivated”.

“We reserve the right to take action as appropriate,” the bloc said in a statement.

Senior agricultural experts from all EU countries will meet on August 14 in Brussels to debate and analyse the impact of the ban, the European Commission said on Friday.

The US largely dismissed the impact of Russia’s decision on US exports.

“The steps that Russia announced are likely insignificant as an impact on the US economy but they are also in some respects a cruel irony,” said David Cohen, US undersecretary for terrorism and financial intelligence.

“What the Russians have done here is essentially impose sanctions on their own people. And they have imposed a type of sanctions – limiting access to food – that the United States and our allies would never do,” he said in a conference call.

In another potential strike against the West, Moscow is considering banning the use of Russian airspace for European airlines.

The ban could hurt not only European long-haul carriers but also Aeroflot, which receives the overflight fees.