Real Madrid striker out of Wednesday’s tournament decider against arch-rivals Barcelona due to a leg injury. 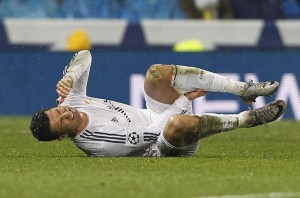 Real Madrid will be without Cristiano Ronaldo for the Copa del Rey final against Barcelona after the forward failed to recover from a leg injury.

Madrid coach Carlo Ancelotti was hopeful Ronaldo would recover in time, but said the player has been ruled out after not training.

Madrid have won two games and lost one without Ronaldo since he was sidelined with a leg muscle injury on top of an already sore left knee.

The Ballon d’Or winner leads the team with 45 goals in all competitions this season and will try to return for Madrid’s Champions League semifinal against Bayern Munich on April 23.

“He is unavailable because it could be a risk to put him on the pitch and we have other important games this season,” Ancelotti said.

Barcelona boss Gerardo Martino also has injury worries and is waiting on the fitness of three of his centre-backs.

Captain Carles Puyol, who has barely featured this term due to a series of injuries, Gerard Pique and Marc Bartra have all been included in the squad and a late decision will be made on their availability.

Barca playmaker Andres Iniesta expects Real to be just as much of a threat without Ronaldo.

“The team doesn’t change whether he is playing or not,” said the Spain international.

“We know how good they are and we know their potential. If Cristiano doesn’t play somebody else at the same level will.”

Barca, who have won the cup a record 26 times, are looking for a morale-boosting victory after crashing out of the Champions League to Atletico Madrid last week.