Cybernetics experts say it’s possible for robots to breed with each other, and with humans, by 2045. 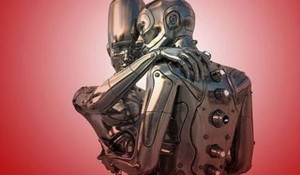 final merger with computer systems and usher in an age of “spiritual” machines. Ray Kurzweil has issued a bevy of likely scenarios in his book The Singularity is Near, and continues to suggest that much of those predictions could arrive much sooner. Others have pointed strictly to theeconomic impact and have marked 2045 has the date when humans could be completely outsourced to robotic workers.

Now cybernetic experts are pointing to the trends in robotics, artificial intelligence, and 3D printing to suggest that the “merger” could go beyond the establishment of an era of cyborgs and into a very literal one: sex with robots.

There has been an ongoing move to create humanoid robots that can more than simply mimic human ability and behavior. Attention is being paid to the social aspect as well. But what is now being proposed has even more serious ethical and existential implications, and very well could bring about the concept of a true “master race.”

The other day there was the announcement that researchers are developing a “Wikipedia for Robots” thatenables robots to learn from a cloud-based Internet sharing system … designed only for them. When this concept fully takes shape, it will resemble a social structure that is decidedly human – our ability to learn from one another in order to become more efficient and intelligent.

This advance toward not only autonomous decision making for robots, but a type of autonomous evolutionmust make us question the next step: what happens if this experiment takes on a life of its own?

George Zarkadakis is an artificial intelligence engineer who believes that robots will move toward procreation rather quickly as they will wish to produce superior offspring. With the rapid advances made in the realm of 3D printing, they would likely begin by printing out their progeny, or perhaps would breed at the molecular level through their silicon and carbon make-up. Others experts such as Professor Noel Sharkey from England’s Sheffield University point to the same concept as the “Wikipedia for Robots” – through a simple software swap, new intelligence could be created, as well as the likelihood of other upgrades like virus protection. Incidentally, the organic component of this is also being researched by geneticists asdownloadable DNA via our own human Internet.

This all does begin to sound quite human, as we naturally wish that our own children become healthier, more intelligent and longer-lived versions of ourselves. But if these human “desires” manifesting among robots doesn’t seem worrisome enough, then what about robot sex with humans? It can’t be dismissed outright.

There is a parallel ongoing mission to further develop an emotional connection between robots and humans. For example, how many of us feel that our computational devices are now integral to our social lives and work? I would be dishonest to say that the computer on which I’m typing these words and communicating with other individuals is not an essential part of my life … and I love having that ability. However, what aboutreal love? The love we have toward family, friends, and the intimacy with partners or spouses? This is where the slope begins to get slippery.

As robots begin to take on an increasing range of human functions, their humanoid (as opposed to only computational) forms are becoming more present in our lives. This is beginning in the area of caregiving in hospitals and particularly with the elderly, as researchers suggest that a “greying population” will need the extra support. We also see robots entering the following “intimate” areas:

Companionship and Assistance: for pets and people

A recent study conducted by German researchers from the International Communication Association also made some revealing discoveries within a group of participants that hint at humans’ theoretical fondness for robots.

One study had 14 participants watch videos that showed a human, a robot and an inanimate object, being treated in either an affectionate or in a violent way. Researchers found that people displayed similar neural activation patterns for affection across the spectrum, indicating the potential for an empathetic reaction toward a non-human. It becomes interesting to note, then, when we return to the vocation list above that the areas most often cited for human replacement in favor of robotic “assistance” are the very vocations that would seem to require the most empathy.

So then we take it one step further. Would humans really want to have sex with robots and, if so, would they be willing to create a hybrid species? If we go beyond the merely prurient area of mechanical sex devices, and look at the possibility for a genuine emotional relationship, it seems that such an interest is developing. Here is one philosophical interpretation of how this interest could manifest toward the final stage:

Robots won’t merely attenuate the need for human intimacy and thus the use of love for instrumental purposes. They also seem to have attractions as companions in their own right. So far the most sophisticated social robots are those developed to ease the loneliness of the elderly . . . At least some people find these companion robots more attractive than humans: they are more straightforward to relate to and less demanding than ordinary ornery humans. But it seems to me that even in the most intimate sphere, and for mentally and physically healthy individuals in the prime of life, robots may eventually become more attractive than humans as companions.

. . . I think the key innovation of robot lovers will be in pretending. Specifically, robots will be designed so as to allow their human owners to pretend that they are loved. And everyone wants to be loved.

Physically, this would require robots to look enough like a person (not even a very perfect replica) for humans to relate to. Cognitively – or rather “algorithmically” – this would require robots to simulate the perfect lover – that is, the perfect worshipper. This lover asks you about your day in a voice that suggests they actually want to hear about it. It agrees with you about what a bitch your boss is, and remembers that mean thing she did last year too! It remembers your birthday, but also all the things you like and don’t like. It cooks wonderful things, and doesn’t complain when you get fat. It never has a headache. And so on. Basically, it’s a Stepford wife. (Source)

Whether or not this is a sad commentary about one person’s take on what meaningful connection entails, this type of interest does not (yet) appear to have the widespread acceptance that it would take to become reality – in a physical or social sense.

But, as noted by Professor Kevin Warwick from the Institution of Engineering and Technology in an interview with MailOnline,

‘just about anything is possible’ and . . . there are already robots with biological brains that mix biological and technological parts.

‘This is not science fiction,’ he said.

He believes that robots capable of breeding with each other could be produced using current research and technologies but it will likely take 20 to 30 years before they could be used on Earth – and there are questions to be asked about whether this is a good idea.

research into creating cyborgs as a result of ‘breeding’ with robots, and creating robots that breed with each other, depends on social acceptance, Professor Warwick said.

‘Over the next 20 to 30 years the question will be on the table and we have to face ethical issues.’

Nevertheless, before this final stage of acceptance, robots will presumably have been breeding with one another first and quickly evolving. The possible outcome of what that collective evolution will bring is, frighteningly, anybody’s guess. The above scenario discussed by these experts does, after all, presume that the production of a hybrid species between humans and robots will be a consensual decision.