RELIGIOUS extremism has come under discussion in numerous forums as incidents of violence and terrorism have increased in recent years reflecting negatively on what many claim to be Pakistan’s Islamic identity. This has left people confused because whatever is done is in the name of religion. Yet the situation is getting worse. 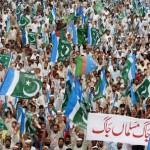 Has it to be so? Created as a homeland for the Muslims of the subcontinent as a result of a political struggle spearheaded by secular leaders, Pakistan was soon after its birth hijacked by elements who have used Islam as a lever to gain control over society and the state. These were parties that had vociferously opposed the creation of Pakistan.

Weak and lacking in confidence, the political leadership, that constantly denied its support for a theocratic state, went on the defensive. Without the vision to anticipate what its weak stance would lead to, the Muslim League went all out to champion the cause of Islam in public life. The Objectives Resolution adopted by the Constituent Assembly in 1949 was the first demonstration of this weakness. This in due course succeeded in creating rifts between the Muslim majority and those who follow other faiths.

In 1974, Z.A. Bhutto, a supposedly liberal and secular leader, finding himself on a weak political wicket didn’t hesitate to play the religion card. He declared the Ahmadis non-Muslim, thus arrogating to the state the privilege of deciding who is or is not a Muslim. Yet he could not save his political career or his life.

This is not how it was supposed to be. When the Pakistan resolution of 1940, that conceptualised ‘independent states’ as a homeland for the Muslims, was adopted it was clearly stated: “Adequate, effective and mandatory safeguards should be specifically provided in the constitution for minorities in these units and in these regions [where the Muslims are in a majority] for the protection of their religious, cultural, economic, political, administrative and other rights and interests in consultation with them….”

In his Aug 11, 1947 inaugural speech to the Constituent Assembly, the Quaid-i-Azam said, “You are free; you are free to go to your temples, you are free to go to your mosques or to any other place of worship in this State of Pakistan. You may belong to any religion or caste or creed — that has nothing to do with the business of the state… We are starting with this fundamental principle that we are all citizens and equal citizens of one state….”

Then what went wrong? Why do non-Muslims feel so insecure in a state whose founding fathers had promised them full protection? They suffer discrimination in jobs and education, have spurious charges of blasphemy levelled against them, their young daughters are abducted and forcibly converted, many are targeted and as a result those who can are fleeing this country.

Even though the vast majority disapproves of these ways it lacks the strength and courage to speak out because the state provides no security to its citizens be they of any faith. As a result many non-Muslims live in fear. The report of the National Commission on Peace and Justice documenting the contents of our school textbooks establishes how the authorities actively promote hatred against other faiths. This religion-bashing has vitiated the socioeconomic atmosphere for the minorities and reinforced the mullah elements’ drive to gain control over society.

It is time we addressed this issue before it is too late and the irrational extremists take total control of state policies. In a consultation organised by the Pakistan Institute of Labour Education and Research recently, members of non-Muslim communities objected to their being referred to as ‘minorities’. They felt it symbolised a discriminatory and exclusivist approach that separated them from the mainstream and thus negated the equal status that Article 25 of the constitution grants them. Although the basic law spells out many safeguards for the rights of non-Muslims, the Pakistan Penal Code has provisions which militate against these safeguards.

In the present situation, the religious parties have plenty of space to promote their agendas of exclusivity. A section of the electronic media has played a disgusting role in the whole affair. They have fanned the fires of hatred against minorities by giving undue publicity to the hate-mongers in the name of promoting Islam. Has anyone pondered the real motives?

Asghar Ali Engineer, an Indian social activist, who has investigated scores of communal riots in India, once told me that without fail he has found an economic motive behind every act of violence in the name of religion. Sometimes, title to land was at stake. At other times business rivalry or employment was the causative factor. In our case political power is also the coveted goal.

In this context the move by former senator Iqbal Haider to form a democratic and non-party platform to promote secularism is a significant one. In its inaugural declaration the forum spoke of creating public awareness about secularism and the need to remove distortions in laws by approaching lawmakers, state functionaries, the media and trade unions to facilitate a new narrative of Pakistani nationhood based on social justice for all.

This is not an easy task but the former senator has committed supporters. So far the going has been slow. Until the forum is broadened into a mass movement it will not make any impact. The absence of this awareness has allowed the obscurantists to take centre stage. (By Zubeida Mustafa – first women to work in Pakistan’s mainstream media)