Glenn Maxwell smashes 46-ball 93 as tourists get Tri-series campaign up and running with massive win against Zimbabwe.

Australia racked up the records in its first game in Zimbabwe in 10 years, hitting the highest ODI score at Harare Sports Club on the way to a 198-run victory and its biggest win ever over the Zimbabweans.

Some brutal hitting by Australia’s batsmen powered it to 350-6 and the bowlers followed up to dismiss Zimbabwe for 152 in 39.3 overs to open the ODI triangular series with a huge win. 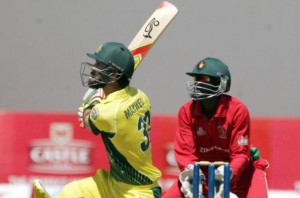 They blitzed Zimbabwe’s bowlers in a damaging fourth-wicket stand of 109 from 54 deliveries.

Hamilton Masakadza made 70 in Zimbabwe’s chase but had no support as the home team fell to its heaviest defeat to the Aussies – 50 runs heavier than the previous record loss in Hobart in 2004.

“Outplayed, simple as that,” Zimbabwe captain Elton Chigumbura said. “Hopefully things will change in the next game.”

Legspinner Steve Smith took 3-16 for Australia and Mitchell Starc and Nathan Lyon had two wickets each to back up the blistering performance from the batsmen.