Islamabad: Dr TCA Raghavan has been appointed as the next High Commissioner of India to the Islamic Republic of 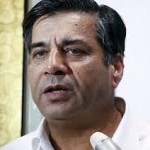 Pakistan. He is expected to take up his assignment shortly, said an announcement by Indian Ministry of External Affairs.

Previously, he had served his country in Pakistan as Deputy High Commissioner from 2003 to 2007.

After leaving Pakistan he also served as Joint Secretary (Pakistan Desk) in the Ministry before moving to Singapore as Indian High Commissioner. He will replace HC Sharat Sabharwal who has reached superannuation age. Raghavan is a cool- headed person with all abilities to develop a large constituency of his friends. During his last stint in Pakistan, he was a popular person among elite class of Islamabad.