Sydney (Tribune International; Oct 9, 2014): The South Sydney Rabbitohs will receive the Key to the City of Sydney from Lord 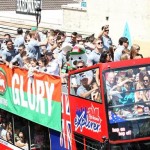 Mayor Clover Moore at a reception in Town Hall Square tomorrow, following their historic victory in the 2014 NRL Grand Final.

The team will parade in an open-top double-decker bus from Souths Juniors in Kingsford into Sydney Town Hall, where the Lord Mayor will bestow the city’s highest honour on the NRL’s most popular club in a ceremony emceed by Ray Martin around 1.40pm.

“Souths’ historic victory means a huge amount to our community, so it’s only fitting we honour them with the key to the city,” the Lord Mayor said.

“We’re delighted to recognise the players’ courage in such a tough match, which ended their decades-long wait for another grand final win.

“Monday’s fan day at Redfern, supported by the City of Sydney, showed how much they have inspired the local community, and I hope everyone comes along to celebrate with us tomorrow.”

The team follows in the footsteps of the late, great Rabbitoh Clive Churchill, who received the Key to the City of Sydney in 1985.

The tradition dates back to medieval times when many cities were enclosed within walled fortifications. The key symbolised the political relationship between a city and the king, or ruler of the land, on which the city was located.

Past recipients of the Key to the City include Australian Olympic and Paralympic teams, as well as:

Major General Peter Cosgrove, accepting on behalf of the Interfet Forces who served in East Timor;

The City of Sydney has a long-standing relationship with the Rabbitohs. In 2005-06, the City worked with the club and other community sporting groups to develop plans for the $32 million revitalisation of Redfern Park, including Redfern Oval.