MOSCOW: President Vladimir Putin on Monday signed a decree recognizing Crimea as an independent state following its vote to secede from Ukraine and join Russia in a referendum that has fanned the worst East-West crisis since the Cold War. 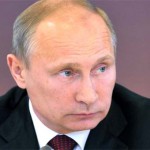 The Kremlin´s official website quoted Putin´s decree as recognising “the Republic of Crimea… as a sovereign and independent state.

“It was issued “considering the expression of the will of the people of Crimea at the general Crimean referendum” on Sunday, it said.

The decree added that it entered into force from the moment of its signature and included the time stamp of 10:30 pm (1830 GMT).

Putin is due on Tuesday to address both houses of parliament about the crisis following the announcement of targeted US and EU sanctions against top Russians and Ukrainians deemed responsible for the breakaway vote, as well as pro-Kremlin forces´ effective seizure of the Black Sea peninsula at the start of the month.

Russia´s lower house of parliament is expected to debate legislation on Friday simplifying the process under which the Kremlin can annex another part of a sovereign state.

The Crimean referendum has been denounced as illegal by both the new pro-European leaders who toppled a Kremlin-backed regime in Kiev last month as well as most of the international community.

Russia´s actions in Crimea even saw its key ally China break ranks and not join Moscow´s veto of a UN Security Council resolution reaffirming that Sunday´s poll “can have no validity”.

Official results showed 96.77 percent of voters in the mostly Russian-speaking region of Ukraine had opted for Kremlin rule in what would be the most radical redrawing of the map of Europe since Kosovo´s 2008 declaration of independence from Serbia.

Putin has thus far signalled no intention to turn back on what he describes as his defence of ethnic Russians who have come under attack from ultranationalists who have been given free rein by the new Ukrainian leaders.

The Kremlin said Putin “emphasised” to US President Barack Obama in a phone call on Sunday that the Crimean referendum “was fully in line with the norms of international law and the UN charter”.

The reaction from both the Unites States and the European Union to Russia´s refusal to call off the Crimean poll or pull back its troops on the peninsula back to their barracks has been both swift and tough.

The 28-nation bloc did not name those sanctioned but Lithuanian Foreign Minister Linas Linkevicius tweeted that there would be “more EU measures in (a) few days”.

The 21 were officially targeted “for undermining the sovereignty of Ukraine”.The EU´s punitive measures were followed minutes later by a White House announcement that it was imposing financial sanctions on seven top Russian government officials and lawmakers in reprisal for the Kremlin´s incursion.

The White House said Ukraine´s ousted pro-Kremlin president Viktor Yanukovych and Crimea´s self-declared premier Sergiy Aksyonov were both on the US list.