LAHORE: Leaders of the Pakistan Tehreek-i-Insaf (PTI) and Pakistan Awami Tehreek (PAT) on Tuesday announced an agreement on a four-point agenda after delegations of both parties met in Lahore to hold detailed discussions over the upcoming marches called by the respective parties.

PAT leader Raheeq Abbasi, addressing a joint press conference with PTI’s Shah Mehmood Qureshi, said detailed discussions were held over the marches which will be held against ‘the dictatorial monarchy’ in the country. 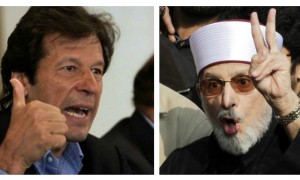 Qureshi said that during the meeting of the PTI and PAT delegations, the leaders observed how the areas in Punjab had been sealed by the government causing immense hardship to ordinary citizens.

Qureshi appealed to the government saying: “If you have any sympathy for the citizens of Lahore, remove the containers and obstructions, which are against the norms of democracy.”

He announced that the delegations had agreed on four points:

Elaborating on the four points, Qureshi said: “We are peaceful people and our struggle is for strengthening of the country’s democracy and integrity.”

The senior PTI leader also said that “if the situation turned for the worse then the federal and Punjab governments would be held responsible since we are determined to remain peaceful”.

Reiterating his stance that the PTI’s march would be held on August 14 despite hurdles, he said he expected Prime Minister Nawaz Sharif to lift the restrictions and obstacles imposed in the country in his speech scheduled to be delivered later tonight.