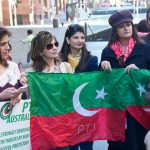 a protest in Sydney in front of the Pakistani consulate. A large number of Pakistanis along with their families gathered to condemn the historic rigging in the general elections on 11th May 2013, Altaf Hussain’s remarks against the sovereignty of the motherland and MQM’s violence against the people of Pakistan. A strong condemnation was also issued against MQM’s brutal killing of Zehra Shahid Hussain (PTI Senior Vice President Sindh).

PTI Australia’s petition in relation to the above concerns is signed by around 1000 Pakistanis living in Australia. This petition will be submitted to the Pakistani & British High Commissions in Canberra and to the Australian government to take immediate action.

The Following are the protesters demands. 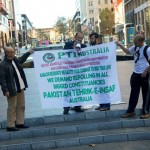 Participants of this protest highly appreciated the courage of the people of Karachi to stand firm against injustice and vowed to continue their struggle under the leadership of Imran khan to build a Naya (new) Pakistan.