Karachi (Press Release APML): Civil Society forum for “Jutice4Musharraf” has been organising weekly protest all over Pakistan against the injustice being done with Former President of Pakistan Pervez Musharraf. Massive country wide protests being held on the 16th February 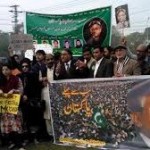 2014 in Karachi at Sea View and Lahore at Liberty Road roundabout followed by a candle light vigil in Islamabad. These protests have been organised and funded by a non political forum which entails of mostly students and women. The driving force behind these protests is the injustice being done against the former COAS & President of Pakistan Gen(R) Pervez Musharraf. He is the same person who stood for world peace in the “War on Terror” and supported the fight against terrorism and lead Pakistan from the front to become one of the first allies in this fight. Today the same person is being labelled a traitor by the oppressing and tested politicians through the victimising courts. We seek the support from the world to highlight this judicial oppression. Specially, the Pakistani community in overseas should come out in Solidarity & Support a against the victimisation of a Gen (Rtd.) Pervez Musharraf and the demoralisation of Pakistan Army.

The next protest announced by the organising committee of Justice4Musharraf will be held on 23rd of February at Sea View Karachi and Press club of Islamabad. Long Live Pakistan, Long Live Pervez Musharraf.