While the dusky beauty bravely ventured onto the Reddit section of AMA (Ask Me Anything), ‘fans’ were just as daring – at times, unforgiving – in their biting questions. 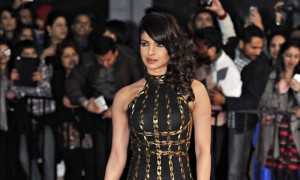 According to NDTV, the questions ranged from absurd – ‘Kya aapke toothpaste mein namak hain (Does your toothpaste have salt in it)?” – to uncomfortable – “Recently a road was renamed in Andheri, Mumbai after your father. What was the reason that it was renamed? What contributions has your father made that a road was renamed after him and not after countless other people who strived and died for India? What made you decide to nominate him and not other people for such a thing?”

“How important is Auto-Tune in your singing career?,” Reddit users wanted to know. Also, “what is your opinion about Bollywood directors blatantly ripping off international movies and getting upset that their movies are accepted at international film festivals?” – a reference to Priyanka’s film Barfi!

Another user called Priyanka out on her stint during the Miss World pageant where she emerged winner in 2000. “You were a beauty queen before you became an actress, do you think beauty paegants are a bad influence on society (in that they set unrealistic benchmarks and standards for society at large)?” the user asked.

The trolling didn’t end there. The flurry of difficult questions kept coming: “You endorse a host of cosmetic creams, don’t you think that these companies are preying on the insecurities of people ? How do you justify your endorsements?”

“You were born and raised in India, and then spent a couple of months per year (for the last 4-5 years) in America. Usually your accent in interviews is unremarkable desi (Indian). However, there is a video of you trying to speak in an American accent. Are you faking it – or do you genuinely possess the ability to switch accents at will?”

Pinvilla reports that though many of the previous questions were unanswered, Priyanka managed to get her opinion on legalising homosexuality across, writing, “I believe that people should be free to live the way they want to. Love is love and not defined by whether you are homosexual or heterosexual! Very simply, I believe in the adage ‘to each his/her own.’ I firmly believe that everyone is entitled to their own sexual preferences.” This was followed up by some unfavourable replies including, “A corollary to this might be – people are free to live with the nose of their choice. Right?”

Priyanka clearly saw red ahead and promptly signed off with a casual: “This has been interesting. Thank you guys for your time. I’m sorry I could not get to everyone’s questions but I hope you enjoyed this as well. xoxo Priyanka”