On 1st Oct 2014, supporters of Gen (Rtd.) Pervez Musharraf in the UAE hosted an event to mark the 4th anniversary of 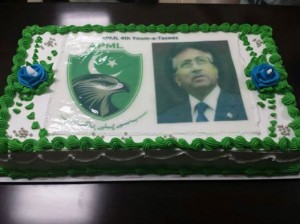 the launch of the All Pakistan Muslim League (APML). Supporters from different walks of life and members of the Council of APML UAE, led by M. G Shahzad (General Secretary APML UAE), gathered to hear the speech of the Party’s Chairman, Former President of Pakistan and Ex-­‐COAS, Gen. (Rtd) Pervez Musharraf, over a video link.

A large number of Pakistanis across Pakistan and around the world saw Mr. Musharraf live on their television screens delivering this historic speech. Senior local and international journalists from various broadcasting networks and newspapers also attended this event.

In his address, Mr. Musharraf said, “I am with anyone who would work for the prosperity of Pakistan, I am of the belief that one day, Insha Allah, Pakistan will progress, however, there needs to be a third political force to implement real change in Pakistan” He added, “The reason I came to Pakistan in 2013, despite all the dangers to my life, including the large number of fabricated/politicized cases, was only because I could no longer see the suffering of the citizens of Pakistan. I have always put Pakistan first even at the peril of my own life.” Mr. Musharraf continued, “It is sad to see that despite all the resources gifted by Allah, Pakistan is still suffering.” 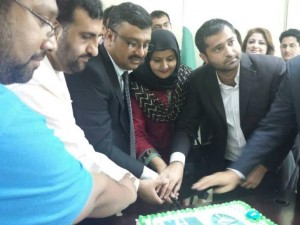 As always, some segments of the media misrepresented Mr. Musharraf’s comments by misquoting him, claiming that Mr. Musharraf asserted that he was a “Sindhi before anything else.” Mr. Musharraf’s actual words were as follows, “First of all I am a Pakistani, then I am a Sindhi. Hence I am wearing an Ajrak gifted by Shahab uddin shah of APML Karachi.”

The attendees, on this occasion chanted slogans of Pervez Musharraf Zindahbadh & Sub Say Phelay Pakistan. They also prayed for safety and success of their leader Syed Pervez Musharraf.

All Pakistan Muslim League (APML), was launched by Gen (Rtd.) Pervez Musharraf in 2010. The party was named after the historical political part lead by Mohammed Ali Jinnah, which lead to the independence of Pakistan, All India Muslim League. APML has large following across the globe and in Pakistan, in the elections of 2013 APML won 1 provisional and 1 national assembly seat despite the unconstitutional ban on their leader Pervez Musharraf to contest for elections.