Sydney (Tribune International): There was a buzz of excitement among Sydney siders that gathered today to see the debut movie of local bollywood star Shahnawaz Khan’s ‘Dekha Jo Pehli Baar’ being screened at the Chemical Science Theatre at the University of New South Wales.

Shahnawaz Khan is the son of Mr Mohammed Shamim Khan, a Sydney-resident. Mr Shamim Khan, the writer, director and co-producer has spent about 2 years in Mumbai to make ‘Dekha Jo Pehli Baar’. Having no previous background in the entertainment industry or film/tv production, it was a giant step to take but he says he’s proud of his achievement. 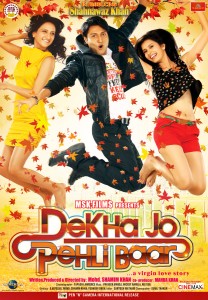 Despite being a low-budget movie made with limited resources, the movie included Bollywood TV artists, Kanika Kotnala the lead female actress and Charu Asopa, former Miss Rajistan, and actress known for her dramas on SABTV and Life Ok channel.

This bollywood college-romance story, has all the common ingredients seen in movies made before including a love triangle, tragedy, satire mixed with a backdrop of a sporting competition but the efforts of the new young emerging actors must be commended.

Mr. Girish Shahdev Wankhede, CEO CINEMAX India says that the enthusiasm of the producer and director, led him to support his mission to enter bollywood and break a path for overseas newcomers to the industry.

The debut performance of Shahnawaz Khan is promising. Shahnawaz says he’s also been performing in theatre in India and its helping him further build his acting skills and talent.  It was a proud moment for Co-producer of the movie Mrs. Mauwa Khan, who read the message of Australian Prime Minister Julia Gillard, supporting the debut of the local Australian residents journey into Bollywood and is thankful for the community for supporting local talent.

The movie will hit the CINEMAX screens across India on December 11th.